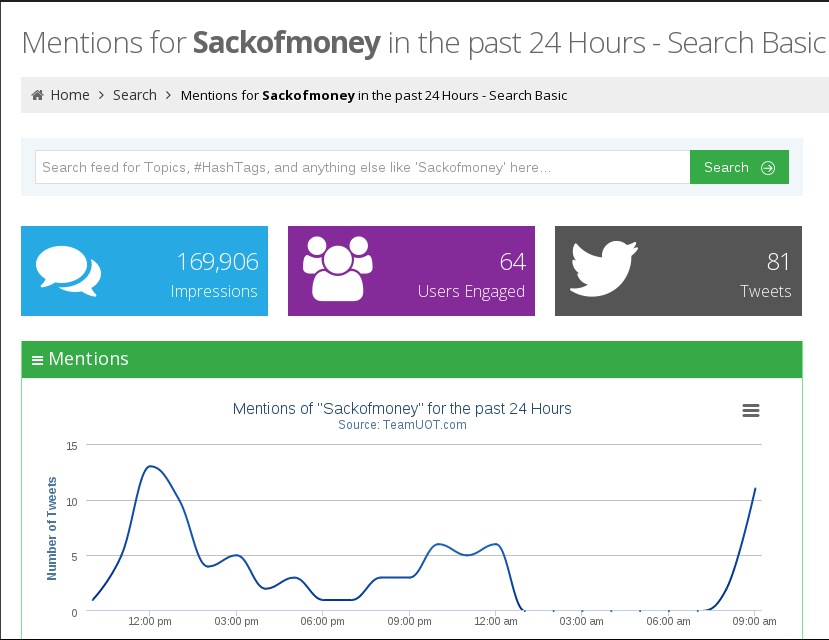 Social media continues to define and disrupt conventional media including online publishing, not just traditional media. Brands can be created and destroyed on social media, jobs can be lost with reckless comments on these platforms and news continues to spread like a wildfire. But social media can also full of clutter and can be extremely difficult to decipher or follow conversations, news stories or track what and who is talking about your brand!

This is where TeamUOT comes in.

Twitter usage in Uganda is growing at dizzying speeds. We have top opinion leaders and influencers commenting and influencing the online conversation. With our solution tracking of accounts every 15 minutes, you will be able to know key thoughts, opinions, content of your brand or product or personality is perceived online.

We decided to give it a spin and we found it to have a wealth of social stats/analytics that you couldn’t ordinarily get through conventional means.

First time on Twitter? TeamUOT will show you around 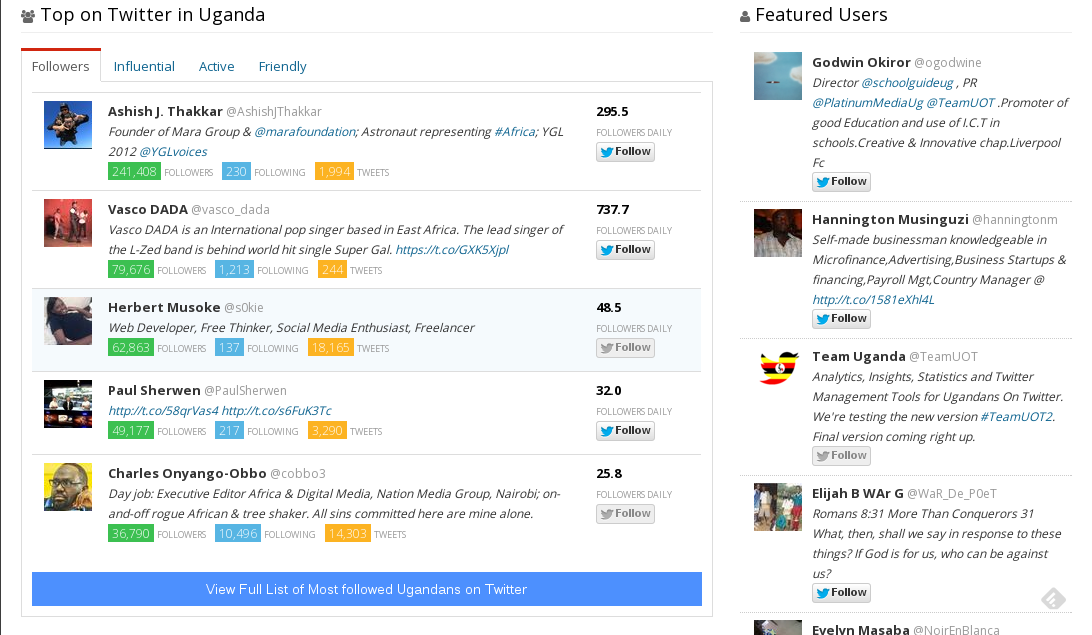 The App shows you the Top Ugandans on Twitter based on a variety of metrics such as the number of followers they have and the numbers of tweets to send per day to give you an understanding of the most “socially influential” personalities on twitter.

The Web App also has “featured users” sideboard which is the editor’s selection of tweeps from the Ugandan Twitterverse. As such, if you’re totally new to Twitter, the App gives you hints on who to follow and why. 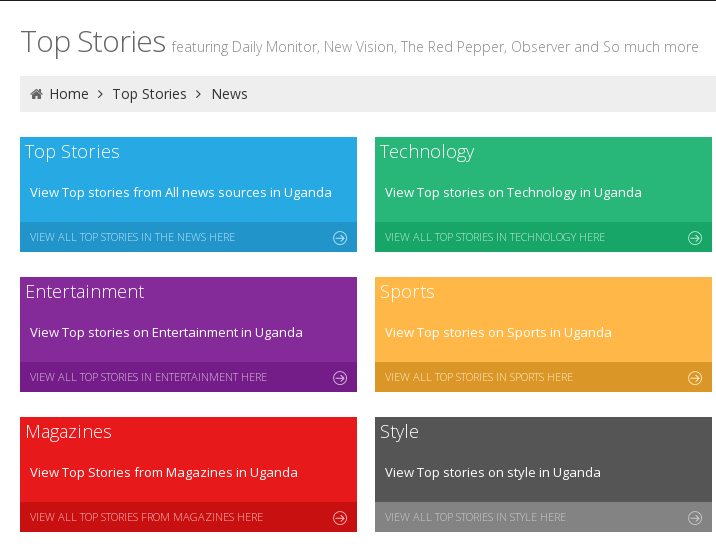 Mainstream media hasn’t ignored the power behind social media — and today, many media houses including online publishers have social media presence. TeamUOT takes advantage of that and aggregates stories into various categories such as Technology, Entertainment, Sports, Style quickly landing you onto your favorite genre of content. You’ll for instance find all tweets from the TechPost under the Technology category, then Kawowo Sports under the sports, then New Vision, Daily Monitor under the News category. This makes content discovery and consumption remarkably more easier as it shields you from the overly crowded and noisy environment on Twitter.

Know what just got or is getting Viral 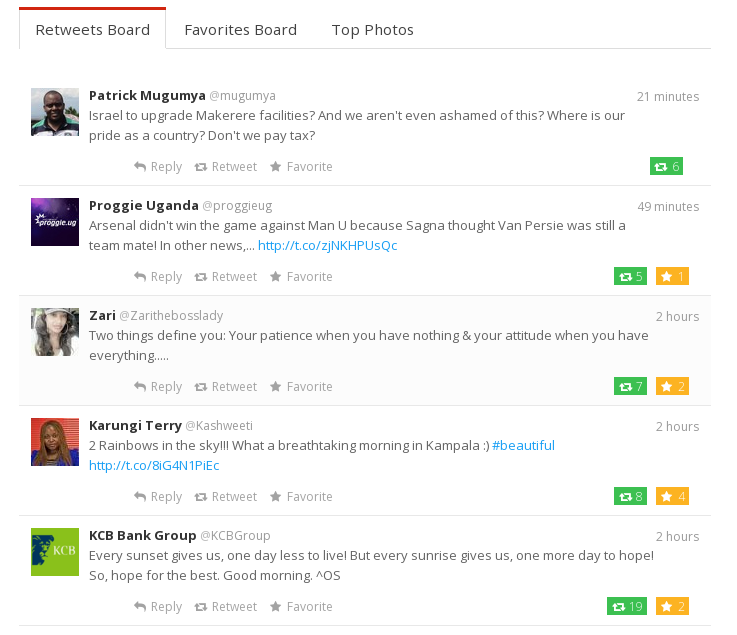 The leaderboard lets you know whats whats getting viral

The Leaderboard feature lets you see the most re-tweeted tweets on the Ugandan Twitterverse which is priceless information for those who wish to track big stories before they happen. Brands, marketing agents and media houses want to keep their tabs on this section because this holds the nuclear bomb launch codes. This is where you attempt abort that missile before it does maximum damage (that’s if you can) or accelerate it depending on which outcome you desire. However, the App doesn’t seem to arrange them in descending order of popularity.

Get deeper insights into HashTags and search queries 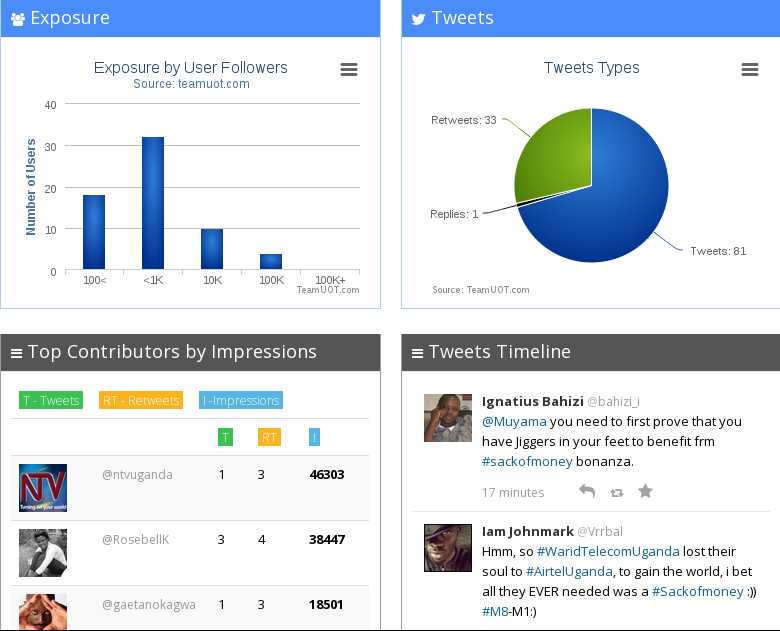 #SomeoneTellUganda is a hashtag that trended on Twitter in Kenya this April 16, 2013 as Kenyans reacted angrily to a newspaper article suggesting new president Uhuru Kenyatta may be Ugandan. But how many impressions did this hashtag have? How many tweets and retweets did it generate? who were the main influencers? All those questions that TeamUOT could help you answer when you search for any hashtag in its search bar located on the top right corner. However not with the basic version that i had access to! You’ll need the a PRO account to access a more details that I’ve mentioned above.

TeamUOT is an “X-Ray tool” for Twitter Analytics, Insights, Statistics and Management for both consumer and Enterprise Users. We absolutely love it. Get started here.