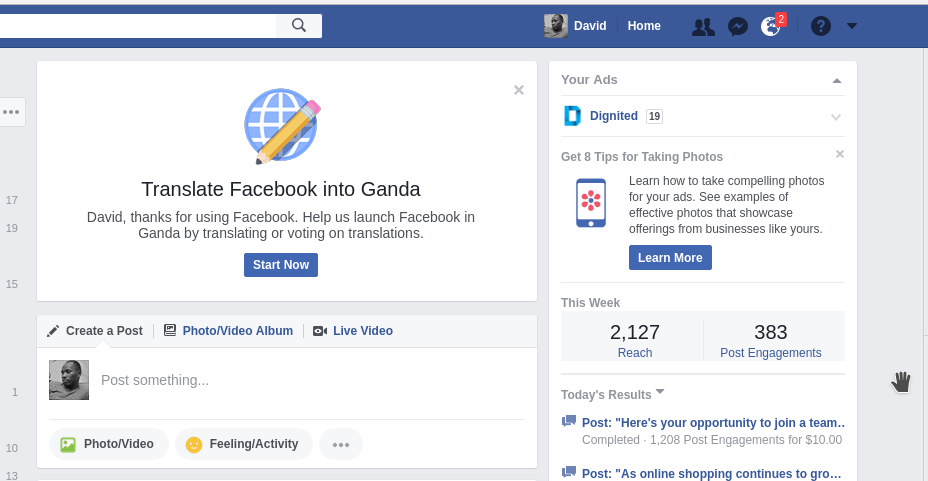 For most people in Uganda, the internet starts and ends with Facebook. According to the Africa Internet Users, Facebook and 2016 Population Statistics, there are 2.2 million Facebook users of the about 13 million internet users in Uganda. Now that’s a big number.

Now the social giant plans to translate its social network to “Ganda” or commonly known as the Luganda language via a crowd-sourced model. Luganda is one the major languages if not the most spoken one in the country.  There are about 5.5 million Baganda whose native language is Luganda of the 40 million people in the country.

Software localization for Africa is a controversial topic as Onapito opined in this article. The argument has been that there’s hardly any actual local content in local languages. Therefore, having only elements of the software interface translated does no good if the actual content the user is interested in remains in some other language.  The second argument is that most the people who use the internet are literate or can at least read/write English once again annulling the whole point of translating to local language.

Related post: Software localization: Is Firefox in Acholi a classic case of putting the horse before the cart?

However, Facebook is slightly different given its model. Since Facebook doesn’t create the content hosted on the platform, but rather empowers users on the network to create and curate the content for themselves in whatever language they wish, chances are that there’s a good amount of content in local languages. It’s common to find people on Facebook comment in their local languages albeit most the comments being in English.

Other multi-national software and internet companies have already attempted localization option. For instance Mozilla Firefox has been translated before to Luganda and Acholi languages. You can also use Google in Luganda via google.co.ug domain. There’s no evidence yet as if these efforts are bringing the bottom line online or if they are simply novel ideas.