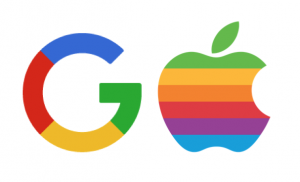 In the mastery of innovations, two core companies have set up quite a stir with every new thing that has faced the market of technology. Apple and Google, both very successful at what they do, have completely different innovations. Being Mobile Tech moguls, one would think they work together to bring the best performance but in truth are very competitive with one another. Their differences range from the operating systems they supply to the types of hardware they use and looks like there is no stopping anytime soon.

Apple is driven largely by centralized development structure stemming for it fabled design studio while Google has a more distributed, open source approach to new products. Which means Google works well with a wide range of devices and service providers whereas Apple works best within itself with their own products and services. But which company is running first place in terms innovations?

Well, Apple beat Google hands down years back with the introduction of the IPhone series in the smartphone category. But Google did not take it lightly by going to sleep or focusing on what makes them more tick, they rather put their expertise to good use and thought up the idea of creating a smartphone. Of course Google’s introduction to smartphone was through Android OS supplied to different phone manufacturers like Samsung, LG Huawei and so on. And in October 2016, Google announced its very own Google Pixel and Pixel XL, their very own smartphone with Chrome OS and Android OS.

Here is the thing, when one looks at the Google Pixel, on the get go, one would confuse it for the Apple IPhone 6plus because the hardware structure design is similar one would think they attended the same school of smartphone hardware design (that’s just my opinion). But which of the two is smarter? With both having smart Artificial Intelligence, Apple’s Siri and Google’s Google Assistant, one would fail for choice.  Google Assistant is more interactive (constantly listening and ready to do your bidding), knows about 70 billion facts from the Google search database and has better speech recognition, but comes in only English and Hindi. Apple’s Siri fails in speech recognition, can’t translate to other languages, but works best with other Apple products like speakers.

Google is good at generating massive technology headlines, but Apple’s innovations come out more polished because they have taken time to factor in what will work best for their devices and deliver what’s best to their clients. Google’s innovations will get people excited for a very short while and after that, well, what next?! But still, that wouldn’t faze the majority people from preferring Google to Apple.

The Internet of Things

Apple’s Homekit allows users to live an integrated life with devices and miscellaneous objects all connected and communicating with each other, whereas Google Platform allows developers to build all types of applications that can employ the use of information data, Meta data, big data measure and predict activity, provide flexibility for its clients.

Google is, has been and will always be the search company, its original mission at the time of conception and is still getting most of its revenue from it. It’s all about optimizing their multifaceted search strategies to preserve its monopoly at a global level. And this hasn’t limited the company from venturing out. Apple has tried to change its scope in the search engine criteria with its Safari and Quick Time but what people like with Google is the simplicity and how it throws an array of different search results that one can choose from. What’s interesting is, you can use service to search about the other. I mean one can use Google search to know more about Apple and vise versa.

Apple is rumored to be developing VR technology for it devices and the first to probably come with support for this technology is the soon to be unveiled IPhone 8 and 8+. But it will have to catch up with Google that has a full range of VR products before we say it has presented a stiff competition for Google, which, by looking at how fast innovations are coming up, won’t be long.

We might spend a millennia trying to figure out what makes these two different from one another with the level at which they are implementing and launching their products and services. Hopefully we will keep seeing the “Clash of The Tech Titans” years ahead and in the process keep enjoying their  products.