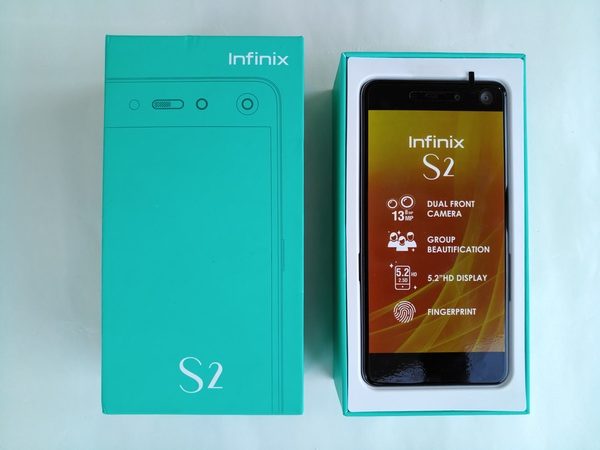 One of the best things about the Infinix is that it comes with a functional 12 month warranty with Carlcare where you can get your device worked on for free should it get an issue while under warranty.

This is the perfect smartphone for an upgrade from an entry level and mid-range to a high end smartphone on a budget. We spent an entire month with the device and now bring you an in-depth review.

The S2 Pro comes in a sealed rectangular aqua green box with Infinix branding. The box has the Infinix logo on the top and sides while the bottom has the specs and IMEI no.  When you open the box, the first thing you see is the S2 Pro. Below the S2 Pro is a pouch containing a little white folder with a SIM card ejector, the screen protector, a little square paper with a list of what’s in the box and a user guide. Below the pouch are compartments containing the Charger head, earphones and micro USB charger. In the box is: 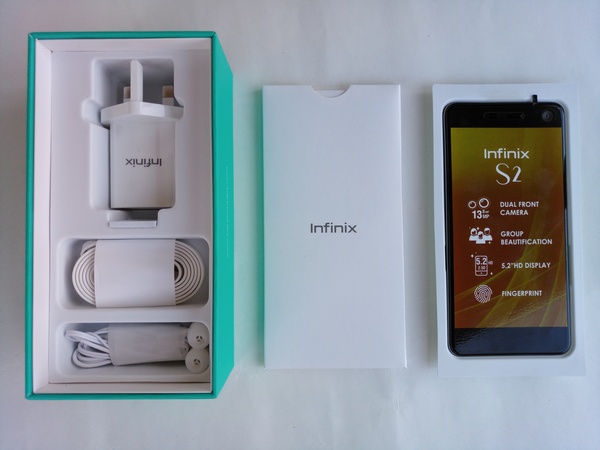 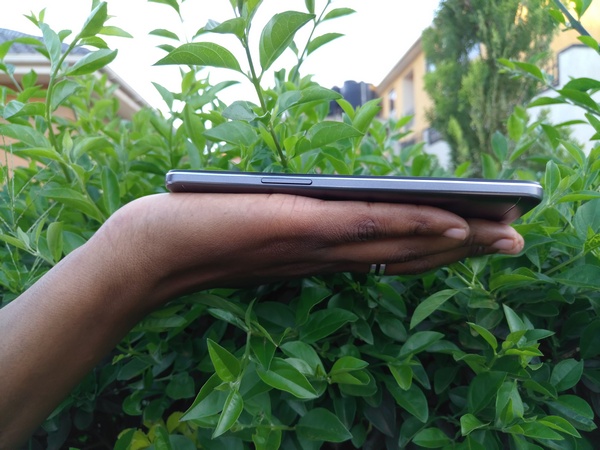 The S2 Pro has a premium metal uni-body design with thin bezels and a little curve on the edges of the display. With approximately a 75% screen to body ratio, The S2 Pro has a wide angle wefie camera at the top right of the device with the normal camera to the left of the wefie camera. Top center is the ear piece and to the left of the ear piece is the proximity sensor.

The S2 Pro has 3 dots at the bottom for the imprinted navigation buttons; the home, back and menu/option buttons. Unfortunately they aren’t so visible so it takes a little getting used to when navigating the device. On the left side are the volume rockers while the right side has a SIM tray and the power button.

The top right has the earphone jack while the USB port has been placed at the bottom center. Besides the USB port are dual speakers but unfortunately they aren’t actually dual speakers since the speaker is only on one side. What that means is that if you block the left side of the speaker, the sound will get muffled.

The back of the S2 Pro is a metal and has the 13MP rear camera, the dual LED flash, fingerprint scanner and Infinix logo in one horizontal line from the back top center. At the back top and bottom are antenna lines. 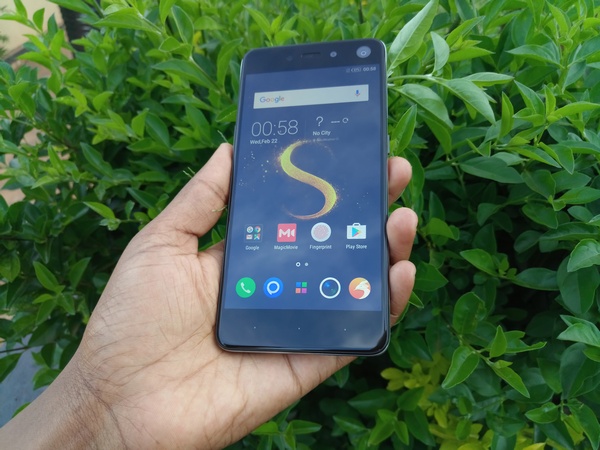 Infinix smartphones come running XOS which is a forked version or what you may call a customized version of Google’s Android OS specifically for Infinix phones. The S2 Pro comes with Android 6.0 Marshmallow up-gradable to 7.0 Nougat. When we got it, there was an available update which we successfully upgradable to. There was no major change in the look and feel except for bug fixes and new functionality.

XFamily of Apps: All Infinix smartpones come standard with the X-family of apps which include XTheme, XShare, XSecurity, XPower, XManager, XClub, and XAccount that help with customization and optimization of the device’s functionality. For instance, XPower app helps you manage the device power and charging, while Xtheme helps you customize your device with themes, wallpaper and fonts.

Other Apps: The other apps that come with the device are the usual Google family of apps which include: Google, PlayStore, Gmail, Maps, YouTube, Chrome, Drive, Play Music, Play Movies, Duo, Photos and Voice Search.

The standard clock, calculator, calendar, camera, downloads, file manager, FM Radio, Gallery, Music, Video Player, Notes and Weather app that come with every Android device. The problem with the many pre-installed apps is that they take up a lot of system space reducing the memory available to you.

What I like about XOS: Apps in the app drawer are organised alphabetically with your most used apps appearing first. There’s also an easy to access notification panel with quick user settings for easier navigation. XOS also has a couple of tricks and functionality that make using the phone really awesome. Some of them include;

Customisation: We loved the fact that we could change fonts, download new ones. We could also customize themes, wallpapers, organize apps into folders among others.

What I didn’t Like about XOS: I couldn’t take apps off the home screen and it sucks. All apps go to both the app drawer and are automatically added to the home screen creating duplication and clutter. The only solution was to create app folders which become too many on the home screen depending on the number of apps you have downloaded.

The Infinix S2 Pro comes with 32GB ROM which is big enough for most of your videos, music and games. The 3GB RAM and octa-core 1.3 GHz 64 bit processor keep things fast and fluid. From multi tasking, gaming to entertainment. It also supports additional external memory of up to 128GB but that is at the cost of the second SIM card. So, one has to choose between expanded memory or a second SIM card but not both.

We took the S2 Pro for a test with Angry Birds and Temple Run and both were flawless. We then added a couple of  our favorite series including the Flash, Dare Devil, The Big bang Theory among others which we enjoyed on the 720*1280 HD display. The earphones surprised us with good sound but the device speaker gave off what we considered below average sound; It could have been better.

For music, the S2 Pro has in built sound enhancers to deliver a crisp sound. Unfortunately these worked best with headsets but not the inbuilt speaker. 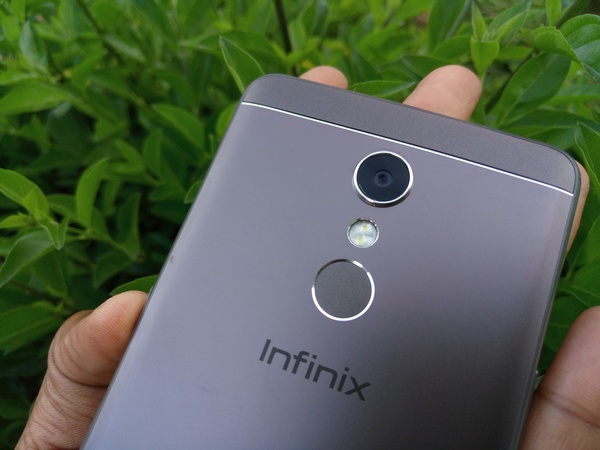 The Infinix S2 Pro is best known for its 13MP rear camera and the front dual cameras that are 13MP and 8MP respectively. We shall be doing a separate Camera review but for this review, we show you what you must know about the S2 Pro camera.

The S2 Pro comes with a 13MP rear camera with some interesting features. When you start the camera, the first thing you notice is the first auto-focus making the images crisp. On the top you can see a switch for the flash, filters and selfie camera. At the bottom is the shutter button, the Video mode switch and the gallery switch for previewing images taken.

When you swipe to the right, you see capture modes like the “normal”, “professional mode”, “Face beauty”, “Night Mode”, “Panorama” and the “PIP” mode.

The PIP mode allows you to take photos using the front and back camera at the same time. So when you are say shooting a group photo, you can activate PIP so that you the shooter also appears in the photo. The Professional Mode gives you creative control over elements like aperture, shutter speed and exposure value among others while Panorama enables you to take panoramic images. When you swipe to the left, you see the settings like HDR, guidelines, gesture shot, delay capture smile shot among others.

The S2 pro has an interesting dual Camera with one wide angle lens and one normal. The Wide angle lens termed “Wefie” or Wide Selfie enables you to capture so much more within the same frame. We were not able to ascertain the actual focal length of the wefie lens from the image meta data but it could be anything between 12-24mm with a bit of fish-eye capabilities that have an interesting distortion effect.

The S2 Pro comes with a non-removable Li-Po 3000 mAh battery with some form of fast charge (Even if that is not mentioned by Infinix that this particular device can charge fast) we observed this when we charged the phone over multiple charge cycles. The Infinix S2 Pro battery charges to 100% in about an hour or less and has quite a good endurance.

From our tests the battery lasted between 12-18 hours on WiFi with average usage and between 8-12 hours on 3G with an average to high usage. So if you are a power hungry user, the S2 Pro will be perfect for you.

With power management apps like XPower, Managing your device’s power is made easy with preset modes like high performance, normal or power saving mode. The app also allows you to kill other battery consuming apps. Lastly, the Ultra power mode can give you up-to 48 hours on a full charge by limiting a lot of functionality and keeping to the basics like voice calls, text, note pad and calculator.

Kilimall currently has an offer where it is giving away the Champagne Gold  and Grey versions of the Infinix S2 Pro at Ugx 569,000. The black version remains at Ugx 649,000. We do not know how long this offer will last but that is without a doubt a steal for this kind of device.

Here we show you how the S2 Pro compares to the competition. You realise that most of the devices to which it can be compared almost double in price for the same or lesser specs.

This is the best and most affordable high end smartphone on the Ugandan market. It has the specs, performance, and experience of a premium device. From the build quality, Camera, good battery performance, regular OTA updates, and fluid operating system, the Infinix doesn’t disappoint.

If you are planning to replace your entry level or mid-range smartphone, the Infinix S2 Pro would make for a perfect replacement.

The review unit we received had some bugs that caused a few issues including, Apps crashing, battery drain and camera shutter lag when shooting at night. This was majorly because of the update from Android 6.0 to 7.0. A few days after, another update was released that fixed the bugs except the camera shutter bug when using the flash at night. We contacted the Infinix team and they said that the 7.0 update was in beta and a stable version was being released soon. As of this review we didn’t have any issues other than the shutter bug.