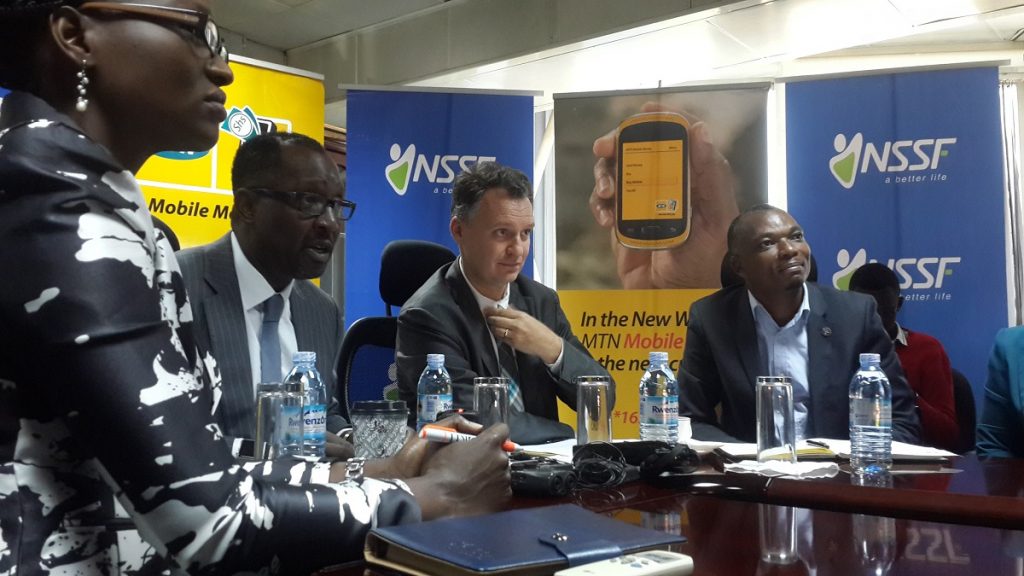 The partnership enables NSSF members on the NSSF Voluntary Membership Plan as well as small and medium sized entities to conveniently make payments using MTN Mobile Money. NSSF on the other hand will be able to receive contributions promptly, thus enhancing its contributions process efficiency.

At a joint press conference today held at Workers House, Wim Vanhelleputte, the MTN Uganda CEO noted that this was part of fostering financial inclusion through easing the payments process of pensions that are critical to avoiding poverty in old age.

“In the last eight years, MTN Mobile Money has had significant impact in the transformation of people’s lives. Now we are further enabling people to pay for their NSSF Contributions using MTN Mobile Money. This will enable a significant part of our customers pay their pension and ensure they don’t retire into poverty,” Wim said.

Adding, “MTN Mobile Money is an enabler and we believe that on top of facilitating transactions, we can also have real impact on the lives of people.”

NSSF Uganda Managing Director Richard Byarugaba also emphasized that the MTN Mobile Money payments will ease the payments process since it is convenient.

“MTN Mobile Money benefits both our members and the Fund. In a survey we conducted last year on voluntary contributions, 67% of respondents cited mobile money as a preferred transaction method when remitting their social security contributions.”

Adding; “in addition to guaranteeing convenience for our voluntary contributors, it will ease reconciliation with an option of automating the upload of contributions onto members’ accounts. It will greatly improve data accuracy, as well as instant confirmation of received contributions through SMS to the contributors”.

Byarugaba clarified that MTN Mobile Money can be used by both voluntary contributors under the NSSF Voluntary Contributions Plan as well as established entities, especially those that remit less than 4 million shillings in social security contributions per month.

MTN Mobile Money, since its launch in 2009 has been a major facilitator of financial inclusion in the country. Over 8.8 million Ugandans depend on MTN Mobile Money, of which the majority had little or no access to any formal banking structure. MTN Mobile Money has also evolved from just being sending and receiving tool to one that enables people to borrow and save using MoKash. Now it is ensuring people save with NSSF, Uganda’s largest pension fund, and earn a return once they retire or are unable to work.

MTN Uganda recently concluded the MTN Mobile Money month that celebrated its over 8.8 million customers for having transformed their lives.

Estimates indicate that millions of Ugandans do not have any form of social security in old age.

NSSF launched the Voluntary Contributions Plan to provide an opportunity to workers not covered by the mandatory provisions of the NSSF Act, as well as those in gainful self-employment that were previously contributing to the Fund to voluntarily save.

To make the payment, VMS members only need to dial *165*3*4# and follow the prompts to make their payments.

Editors Note: This is a Press Release from MTN Uganda.