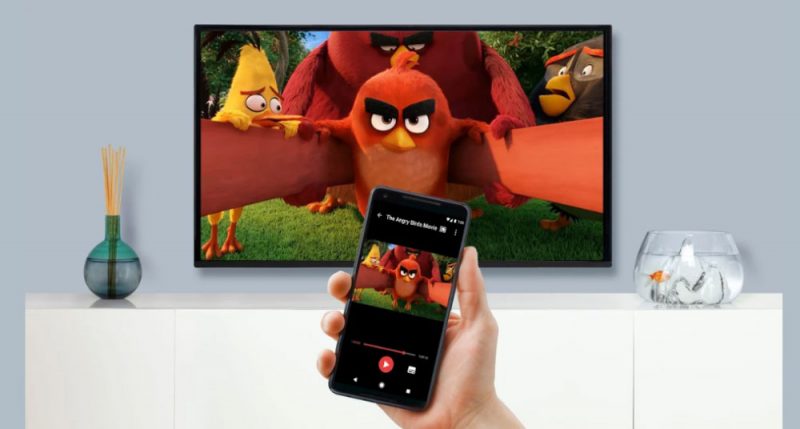 Your only option is to go wireless. This is where Miracast comes in.

Miracast is a wireless standard maintained by the WiFi Alliance much like USB, Bluetooth, WiFi, Thunderbolt. It enables wireless connection of laptops, tablets, or smartphones to displays such as TVs, monitors or projectors. If your device supports Miracast, you could share that presentation on your laptop to the projector without using VGA, USB or HDMI cables. Think of it as HDMI over WiFi or “Wireless HDMI”.

Miracast doesn’t need  a wireless router so that you should connect your laptop and TV on the same network first as is the case with the other setups. It uses WiFi Direct which is like Bluetooth but for devices that support WiFi. As you already know, Bluetooth devices directly wirelessly connect to themselves without any intermediary device. This is called a peer-to-peer connection.

Miracast supports 1080p Full HD video (H.264 codec) resolution and 5.1 surround sound. That means if your Miracast or more appropriately screen mirror a Full HD movie from your smartphone, you will get the same crisp picture and sound on the other big screen.

Most Android devices already support Miracast as long it  runs Android 4.2 or later. To turn on Miracast feature, go to your Android device, and go to Settings > Display > Wireless display. Other Android devices have the feature on quick startup menu you access by swiping down the notification bar. My Infinix for instance calls it “Cast”. Once your turn on it, your device should search for nearby Miracast receivers such as your smart TV.

The latest Smart TVs with WiFi enabled later than 2014 should have the feature already integrated. But if your TV doesn’t not support Miracast, then you need to buy an external Miracast dongle such as ASUS Miracast Dongle or Microsoft Wireless Display Adapter. They cost less than $100. These will turn your display (projector, smart TV, PC) into a wireless Miracast receiver to which you cast your small screen to.

Miracast is already supported on Windows 8.1 and 10 as well as Android 4.2 and later. It’s also supported in Chrome OS that runs on Chromebooks. Apple users unfortunately can not use Miracast on their iOS and MacOS devices. Instead Apple has its own proprietary peer-to-peer standard called AirPlay.

2 thoughts on “What is miracast: A complete beginner’s guide”