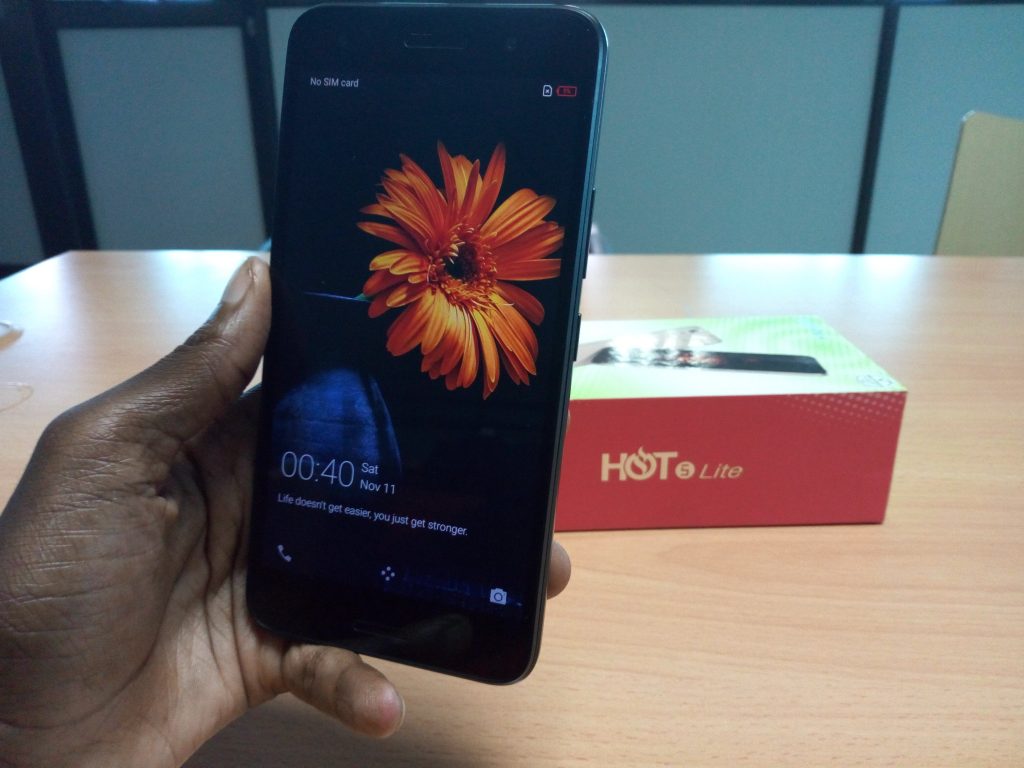 The Infinix Hot 5 Lite X559 is the lite version of the Hot 5, one of the latest additions to the Infinix Mobile Hot series family. It comes as an entry level device, one that fit on any smartphone budget list, and does have some amazing specifications worth checking out.

The Hot 5 Lite does not differ much from the Hot 5, and buying it will only mean a downgrade to 1 GB RAM from 2 GB, and having no fingerprint sensor.

The Bad: No support for 4G, We expected a better camera, Huge chunk of pre-installed apps you probably won’t even use.

The Hot 5 Lite, like many of its Infinix siblings, is a simple easy-to-hold and portable smartphone with an elegant design, a 5.5″ High Definition IPS screen, a screen resolution of 720*1280 pixels, a plastic frame, and a smooth plastic back cover.

The screen is quite big, big enough to take you through when swiping and browsing.

Themed as “My Mobile Cinema”, the Hot 5 Lite does not disappoint with dual front speakers that employ the Dirac Stereo Widening technology, also found on the Infinix Smart.

The Hot 5 Lite accepts dual Micro SIM though does not support 4G LTE.

A Good but lacking Camera

Infinix has grown us so used to good camera phones, and one would expect the Hot 5 Lite to have the same.

Well, no. The front camera comes with a 5.0 megapixel sensor, not bad for an entry level device, but lacking for an industry that demands for selfie phones on the market.

The rear camera is of 8.0 megapixels, and on average takes good enough photos to go with.

Nevertheless, both cameras have LED flash lights on them to assist in dark zones.

The device runs on 1 GB of RAM and an internal storage of 16 GB ROM. It features a 1.3GHz MediaTek chipset quad-core processor that does perform well, alongside a Mali T720MP1 GPU handling the graphics diligently.

Multitasking on the phone, swiping and rolling are easy on the go.

The XOS family of apps, like on the rest of Infinix smart phones, includes Feedback, Power, System Update, User Guide, Weather, XSecurity, XCloud, XManager, XHide, and XAccount that help with customization and optimization of the device’s functionality.

The home screen is familiar, if you’re really accustomed to Infinix devices, while the app folders on the second homescreen page are accessed with a swipe to the right or left, thus reducing on the number of clicks you’d make to reach them.

The other apps can be seen by tapping the A-Z listing icon, and these are the usual apps including Google’s family of apps which includes: Google, PlayStore, Gmail, Maps, YouTube, Chrome, Drive, Play Music, Play Movies, Duo, Photos and Voice Search; The standard clock, calculator, calendar, camera, downloads, file manager, FM Radio, Gallery, Music, Video Player, Notes and among other apps that come with every Android device.

Good news is: 16 GB is not any bad for an entry level smartphone, given that you as well have room for an SD card that can accommodate up to 128 GB.

The bad news is: So many pre-installed apps will mean that a great deal of that storage is already eaten up, and you will only be left with little for your further storage.

The Hot 5 Lite, like its higher sibling, carries an amazing non removable 4,000mAh battery to support the device as it works.

With the loud speakers, and swift processing, you could have to worry for your battery power but the device has the capability of running for more than 26 hours of active use, yet on a single charge.

You can as well get it online via Jumia and Kilimall.