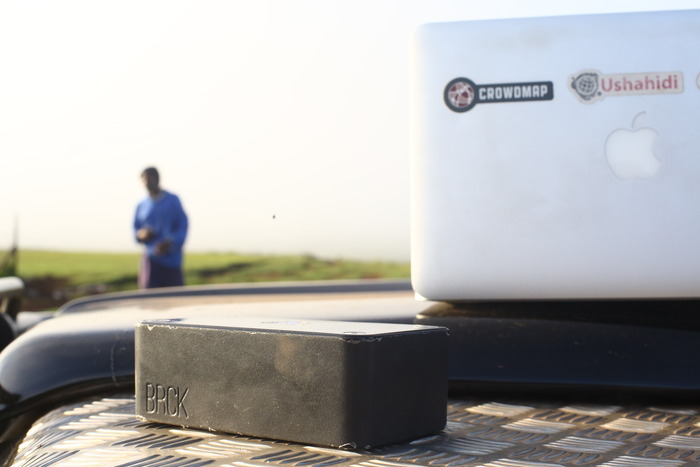 After making rounds of headlines on the World’s top Tech blogs and publications such as Forbes, AllthingsD, The Next Web, Wired; BRCK— a smart, rugged device that could connect to the internet any way it could, hop from one network to another, create a hotspot for multiple devices, while plugged in or running on battery power — is on the verge of hitting mass production from proto-type stage after securing more than $125,000 by crowd-funding spearheaded by Ushahidi, a Kenyan non-profit technology company that builds open source software, tools that democratize information for ordinary people.

The idea behind BRCK is that all kinds of jobs require steady connectivity, even when infrastructure is spotty due to wireless connections that come and go, intermittent power, or devices that can’t share connections. Seeing this, Ushahidi set out to redesign connectivity for the world they live in – Africa. As they laid out what such a device would look like — physically robust, able to connect to multiple networks, a hub for all local devices, enough backup power to survive a blackout — they realized that the way the entire world is connecting to the web is changing. We no longer only get online via desktops in our office, we have multiple devices, and we are all constantly on the move. So Ushahidi designed the BRCK for the changing way we connect to the web around the world, from cafe-hoppers in San Francisco to struggling coders in Nairobi.

It’s the equivalent of a backup generator for the net, a battery wired for an access point, mated to a GSM modem, designed so that your coding session doesn’t have to end when the power goes out. – Ethan Zuckerman, director of the MIT centre of civic media.

The BRCK works much the way your cell phone does, by intelligently and seamlessly switching between Ethernet, Wifi, and 3G or 4G mobile phone networks. By plugging in a SIM card or connecting to a wired or wireless ethernet connection the BRCK will automatically get online. Power is also redundant; if your AC power fails, BRCK falls back on its 8-hour battery without needing to be told.

The BRCK is a software infused device, operating seamlessly with the BRCK Cloud, our website that you can access from anywhere to check how network connections and electricity are performing on your device. You can also manage alerts and applications remotely from your phone or computer, as well as gather data reported from attached sensors or computers.

There’s a smart backend to the BRCK as well, a cloud-based system that syncs your BRCK with current data from cellular providers in your country. This backend provides a dashboard of metrics to monitor your connectivity and devices over time, and a way to install new services like VPN, Dropbox or any other app that you might create.

Ushahidi has a motto that, “if it works in Africa, then it will work anywhere!” Do you think BRCK will disrupt the way people access internet in resource-struck areas?

For more information about Ushahidi’s BRCK campaign, visit their page on kickstarter.