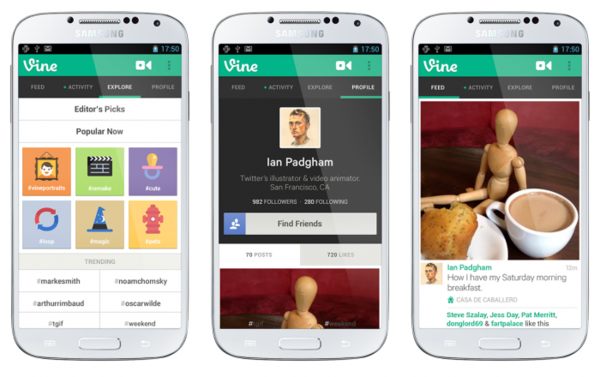 Remember the Twitter app for videos Vine which was launched exclusively for Apple devices? It’s now available for Android here.  It is the popular way to download a six second video.

This app has been released today Monday after being launched exclusively for Apple devices four months ago. It is said that since the launch Vine has got 13 million users making it a hit for twitter and it thought to become a boom after this release to Android. As we all know Android has more Twitter users than Apple.

It is said that users can easily create videos by touching their phones to record. Here you let go and touch the screen again and can stitch together more shots, this according to Gizmodo.

Though the disappointment is that the features will not be seen on Android as on Apple devices. The beauty is though also Andriod has features Apple does have including the ability to zoom in when shooting a video.

The features Android users don’t have are the ability to use forward-facing cameras, include mentions and hashtags, search, receive notifications and post Vine videos to Facebook.

Over the new few weeks, though, Twitter said, the two versions of Vine will become more in sync.