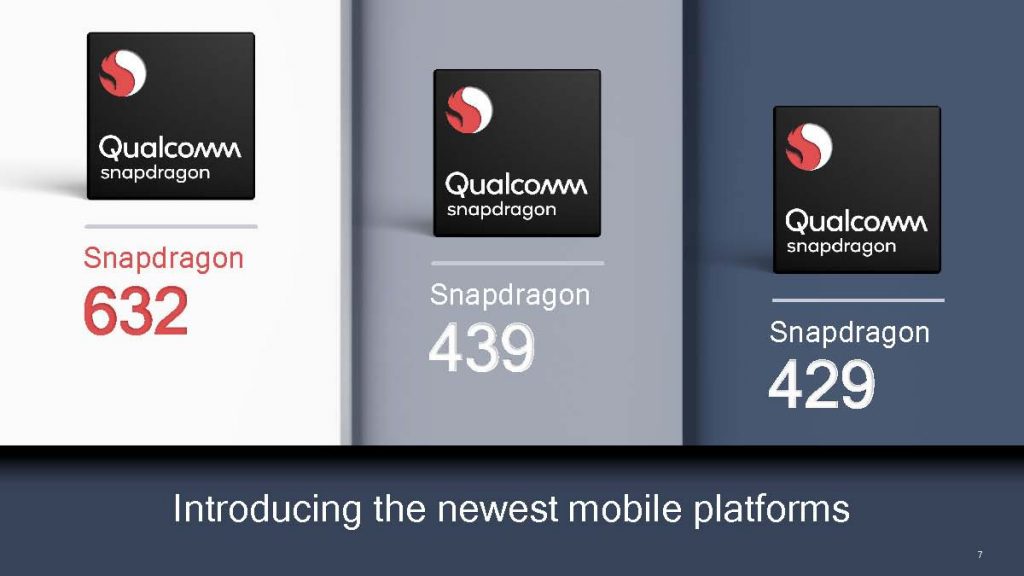 Just a month ago, Qualcomm announced the Snapdragon 710 chip – a chipset designed for manufacturers to create mid-range smartphones with advanced features like AR Emoji, Animoji and Face ID.  The company seems to be working harder on this and is bringing more premium technology advancements to lower Snapdragon tiers, in a bid to transform the mass-market consumer experience.

Let’s have a look at each of them.

The Snapdragon 632 is the newest addition to the 600-series, adding to names like Snapdragon 636 while offering features like eight Qualcomm Kryo 250 CPUs and an Adreno 506 GPU. Of the eight CPUs, the chipset features four performance cores, and four efficiency cores, which kick in for lower-power tasks, ultimately saving battery.

It offers mobile experiences like mainstream gaming, 4K video capture, artificial intelligence, and fast LTE speeds;  and has support for displays with up to a Full HD+ resolution, as well as up to a 24-megapixel single lens, or a 13-megapixel dual-lens camera.

Read About: Future mid-range phones will appear high-end, thanks to Qualcomm’s Snapdragon 710 chipset

The Snapdragon 439 is designed to be an excellent option for manufacturers building ultra-budget handsets. It is a replacement of the Snapdragon 430 and comes with a number of great features. Like the Snapdragon 632, it also offers eight CPUs, with four performance cores and four efficiency cores — though the CPUs here are Cortex A53 CPUs rather than the Kryo 250 CPUs in the Snapdragon 632.

The chipset also features an Adreno 504 GPU, which delivers up to a whopping 50 percent GPU performance boost over the Snapdragon 425, and it also supports up to a 16-megapixel single sensor, or an 8-megapixel dual sensor.