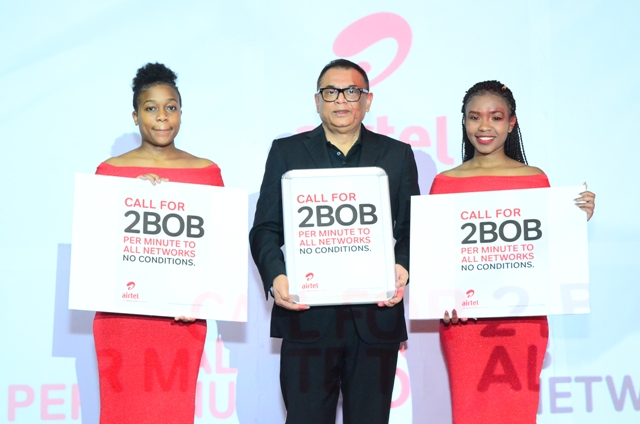 For a long time now, Airtel Kenya has been playing catch-up with the market leader, Safaricom. Recent CA reports show that Airtel is closing in on Safaricom at slow but steady pace and today, Airtel is pushing yet another lucrative proposition for it’s would-be customers.

Starting today, new Airtel customers will by default be on a tariff that allows them to make calls across any network in the country for a flat rate of Ksh 2/- per minute. Existing customers haven’t been left out. Dial *544*2# to opt into the service. Airtel Kenya CEO Prasanta Das Sarma noted that the 2bob rate to all networks is part of the company’s continuous rollout of innovative propositions for Kenyans.

This new tariff with a 50 per cent saving for on-net and off-net calls with #NoConditions, allows our subscribers to enjoy making calls for a longer duration. pic.twitter.com/GGFHhl8Mvf

This 2/- tariff marks yet another milestone by a teleco in the endless pursuit to offer Kenyans affordable rates, eventually promoting the prevalance and usage of mobile phones in the country. “We are delighted to be making history by introducing this new unique tariff that gives double the value to the customers as now they can talk twice as much while experiencing unmatched high quality on our network” – Airtel Kenya CEO Prasanta Das Sarma.

Communications Authority of Kenya (CA) reports covering the period between January and March 2018 show that Airtel Kenya increased its local mobile voice traffic by recording a total of 3.6 billion minutes up from 2.5 billion minutes recorded during the previous quarter. This increase is attributed to the 1.3 million mobile subscriptions gained during the period under review as well as the aggressive marketing of Airtel’s products and services.