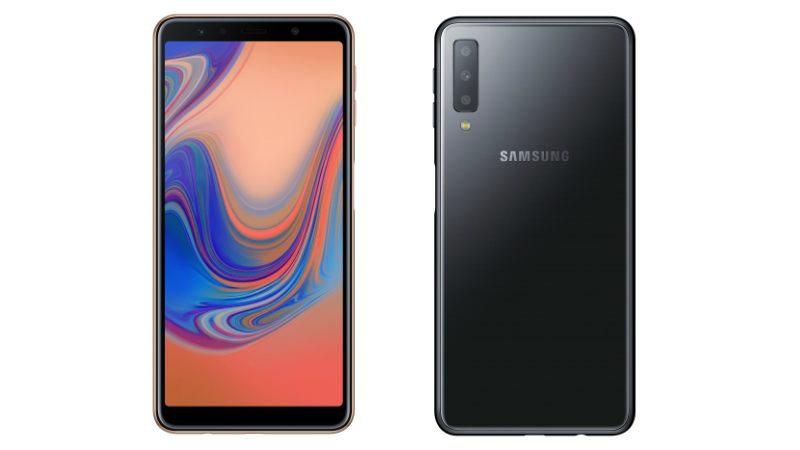 Dual rear camera setups are the order of the day for smartphone OEMs in this smartphone era. The budget kings like iTel Mobile and Infinix boast of this feature. Even the mighty manufacturers like Samsung and Apple also have phones portraying the dual camera setups. Meanwhile, Samsung has gone a step further by launching a smartphone with triple rear cameras, the Samsung Galaxy A7 (2018).

The renowned manufacturer first launched this smartphone in their native country -South Korea- before unveiling it in other countries. This smartphone happens to be the first smartphone from the brand to sport three shooters at the rear. Given the fact that Samsung’s A series is their upper mid-range lineup, the device also packs incredible features which will be discussed as we proceed. 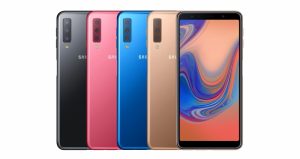 If designs are anything to describe Samsung with, they’ll definitely be amidst those topping the charts. Samsung Galaxy A7 (2018) is another testimony of how good Samsung’s aesthetics are. Aluminium alloy forms the framework that defines the shape of this smartphone. On top of this metal, Corning Gorilla Glass is available to grant the device protection in case it falls.

Unusually, Samsung implements a classy side-mounted fingerprint sensor on this device. Thus, eliminating the need to move the fingers to the back in order to use the phone’s biometric security.

Even more, the device’s bezel-less design makes it appealing to the eye. The triple rear setup appearing at the back further accentuates the phone’s beauty. Sticking to Super AMOLED touchscreen, Samsung presents a 6-inch panel that uses 1080 x 2220 pixels resolution as well as 411PPI density. Always-on Display is another key feature of this phone’s display department. 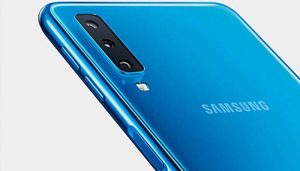 The highlight of this smartphone is the triple cameras taking up the rear position. A breakdown of the cameras sees the device having: a 24MP primary sensor with PDAF feature, an 8MP telephoto camera with 12-degree ultrawide lens as well as a 5MP shooter responsible for impacting depth of field. When videos are to be recorded, the cameras can do that at resolutions of either [email protected] or an even better [email protected]

Lovers of selfies can enjoy the professionalism of the front 24MP shooter with HDR support. As a matter of fact, Samsung added some of the features found in its flagship series (Galaxy S and Note series) such as Live Focus, AR emojis and Pro Lighting Mode to this device.

Samsung Galaxy A7 (2018)’s performance is masterminded by an Octa-core CPU that clocks at 2.2GHz. The performance is further coordinated with help from either a 4GB or 6GB RAM. Yes, the phone comes in three memory configurations: 4GB RAM + 64GB ROM, 4GB RAM + 128GB ROM and 6GB RAM + 128GB ROM. More so, a dedicated slot for MicroSD card is available to aggrandize the storage to 512GB.

The phone’s duration is taken care of by a non-removable Li-Ion 3,300mAh battery. This phone comes with a Fast Charging technology that makes the battery charge at a very high speed.

However, here are the Galaxy A7 (2018) Specifications:

Currently, the Samsung Galaxy A7 (2018) costs $410 globally. It is available in European and Asian markets although it’s expected to be launched globally this month.