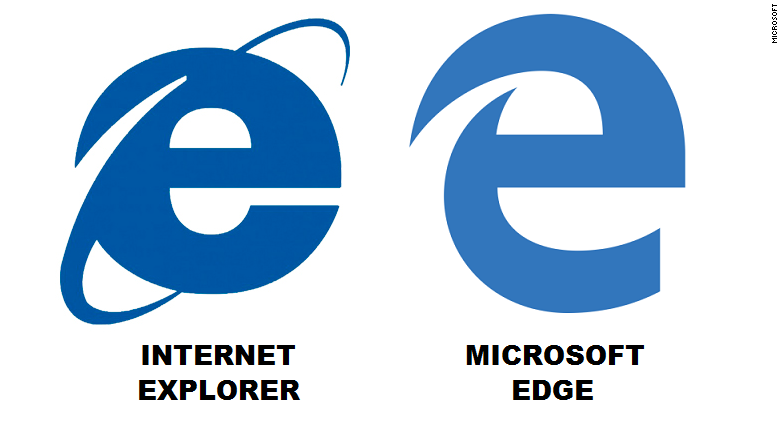 So with Microsoft edge replacing Internet Explorer as default browser,how different are they? We shall look at the different aspects in depth.

With Internet Explorer, things are fluffy making it hard to use and hence it isn’t user friendly. Internet Explorer has a separate row for the title and minimize, maximize and close buttons, while placing its tabs on the second bar. In contrast, Microsoft Edge is a much simpler piece of software, both in terms of the way it looks and how easy it is to use. Edge combines the two rows into one to save space hence freeing up more room in the second row for a longer URL bar and clean-looking buttons. A loaded web page occupies a larger part of the screen with boxes and buttons kept to a minimum.

Security continues to be one of the biggest problems Web users face. On just about any platform, issues can arise that, if left un patched, can wreak havoc on a person’s computer. Dating back to the early days of Internet Explorer, it has faced serious security problems and that trouble still erupts today. Edge’s password-management system is fully integrated with Windows 10’s Passport security system. The move to a standards-based extension system will also improve security, limiting the sorts of resources that extensions have access to.

Possibly the biggest plus point, however, is related to Microsoft Edge’s status as a Universal app. All Universal apps run within a sandbox framework, which effectively insulates it from sensitive system resources; should there be an exploit of a vulnerability within the browser, its extensions or code within a web page, the attacker will have less access to the system’s resources than the user.

Related Article: 9 reasons you should use Firefox instead of Chrome

According to Microsoft, there’s a total of 49 new features in the Microsoft Edge browser some of which are minor additions, but here are the big changes:

Reading view presents an attractive, distraction-free layout that lets you concentrate on the text. This is a feature that’s been present in Firefox and Safari for some time and missing from Internet Explorer. The articles appear alongside the bookmarks, browsing history and downloads in the Hub menu. Importantly, articles on your Reading List are also synced across any other devices you have running Windows 10 and Edge.

Web Notes is a  new feature aimed at users of hybrids and tablets with stylus support. It allows users to highlight and annotate web pages with freehand scribbles, save them as notes, and share them among friends, family or colleagues. Those without access to a stylus can still add notes using a touch pad or touchscreen, or add numbered text notes with a keyboard.

Cortana integration. Edge brings Microsoft’s digital assistant Cortana to the desktop. With this aide at your disposal, you can easily pull up pictures, explanations and search results on any word or link while you’re browsing by right-clicking and selecting “Ask Cortana.” The information slides in on a panel on the right, so you don’t have to leave the page you’re on.

A notable feature missing from Edge is support for any kind of plugin or extension framework. Microsoft removed support for Internet Explorer plugins.

Microsoft removed many of the Internet Explorer features. Legacy code retained in previous versions to ensure backwards-compatibility has been removed in a move towards a more streamlined, standards-based approach. Among the old technologies that have been removed are ActiveX, Silverlight, VBScript, Vector Markup Language and Browser Helper Objects.

Microsoft has placed more emphasis on standards, better interchangeability with other browsers, and increased performance. Thus, while hundreds of APIs and features have been removed from Microsoft’s browser code, other standards-based features have been introduced. For example, Edge has built-in support for Adobe Flash.