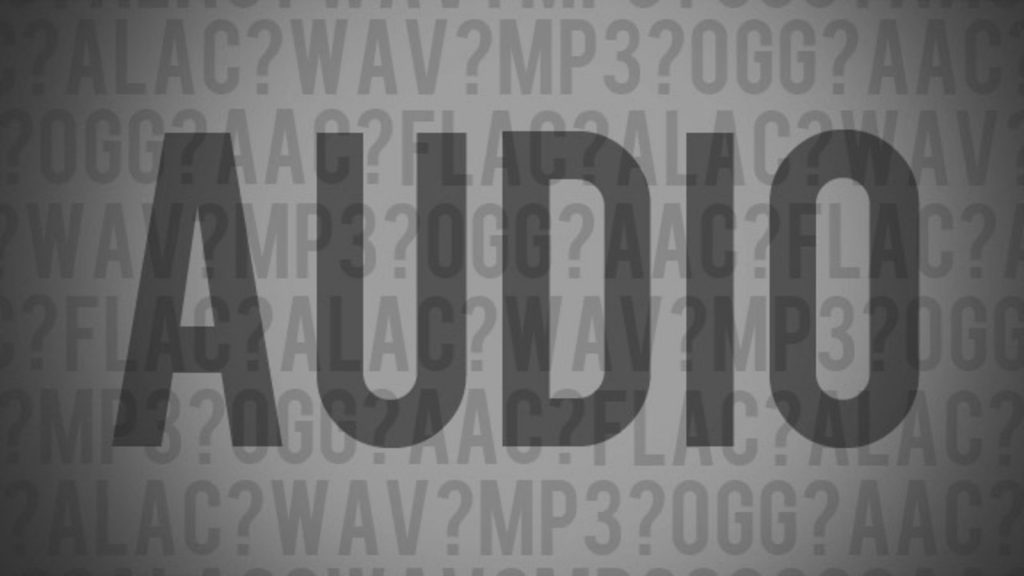 In our everyday life, we come by audio file extensions like ‘.mp3‘, ‘.flac‘ and others. Even if you don’t actually see them, you hear music in this file format almost every day. Audio format is the type of format in which digital audio data is stored on an electronic device. These formats vary from each other in the quality of sound they deliver. Each of the audio formats we have here possesses different characteristics in terms of the codecs that work with them. In this context, we are discussing digital audio which has a sampling rate and bit depth.

You can think of sampling rate to be how many times a particular section of the audio file is read per second and bit depth as to do with the unique ways it is read or the information drawn from it. For example, the CD takes 44, 100 samples of audio signal in one second measured 44.1kHz with a sample depth. This occurs in continue sequence has the sound from the CD is being read and is a good example of pulse code modulation (PCM) -more on that later. There is the parameter called fidelity which describes how close a reproduced sound is from the original recorded version. High fidelity (hi-fi) describes with high quality of sound.

Simply put, the higher the two parameters (sampling rate and bit depth), the better the quality of the sound. That said, let’s take a look at some of the most popular audio formats we have.

This is undeniably one of the most popular audio and also very old created way back as 1993. Fully known as MPEG-1 audio layer 3, the MP3 format is achieved by lossy compression which results in the significant reduction of file size. This way, the audio fidelity is greatly reduced with a significant portion of the audio signal dimmed imperceptible by humans cut off. The way the audio data is encoded results in inaccurate approximation and partial loss of data which is where the term lossy compression comes in.

If you are particular about audio fidelity and have an interest in quality sound, then the MP3 format wouldn’t even be an option. However, the good side is practically all audio playback device can play it. Plus it was invented at a time where bandwidth and storage space was still tight and something small but still functional was needed. In this modern world, bandwidth and storage have so much to accommodate better sound quality

Due to the incompetency of the MP3 audio file format, the AAC (Advanced Audio Coding) was created. Also using lossy compression, this file format has a better sound quality than your MP3 file at the same bit rate. Adopted by Youtube, iPhones, iPads, iPods, PS3 as well as the PlayStation Vita, Nintendo Wii and even Android phones as the standard audio format. However, it is still not as good as WAV and FLAC audio formats. Despite offering better quality than MP3, AAC was really not able to achieve the level of popularity MP3 did.

This belongs to a separate category from the two audio formats discussed above because of its uncompressed nature. WAV which is waveform audio file format, is just another form of PCM and can be used interchangeably with PCM. You can consider WAV as a container which is has that is read before the PCM file. Developed by Microsoft, the audio format offers a higher sampling rate and bit depth than MP3 and AAC. The WAV file is uncompressed, in the sense that PCM which is what the file is encoded in is a direct conversion from sound. An equivalent of the WAV audio format was made by Apple and called AIFF (Audio Interchange File Format) used in Mac OS computers.

In full, FLAC stands for Free Lossless Audio Codec and is a form of lossless audio conversion format. The beauty of FLAC is that, it is able to reduce the size of the audio file without diminishing the audio quality. It is an example of a win-win situation, the open source format which was introduced in 2001 offers high fidelity on its sounds. The native playback of this audio format is supported by Android 3.1 up, iOS 11 upward, macOS high Sierra upward, Windows 10 and the Tidal streaming platform. Audio file in the FLAC format are not anywhere as reduced an in MP3 or AAC but it does offer more superior quality. So it is a case of whether you prefer quality over space conservation.

There are still other audio formats out there, and like the ones here have either lossless compression, lossy compression or no compression at all.