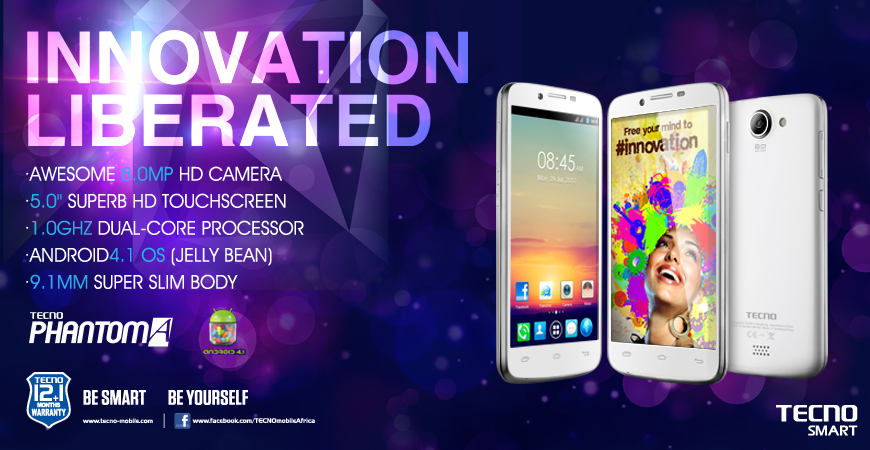 The smartphone battle in Africa is an interesting one. From the days when Blackberry was king to the coming of the iPhone and Android, the battle has taken on many fronts. Now Tecno formerly known for its cheap feature phones made its intentions to join the smartphone battle pretty clear when it released the Tecno Phantom A .

The mid range smartphone looking much like the Samsung Galaxy S4  was launched in Nigeria going for 35,000 Naira ($216) and is expected to go for about 800,000 Ugx ($300) in Uganda at selected MTN outlets and TECNO distributors. The specs are impressive and that is probably why other manufacturers need to recognize the coming in of a new competitor.

Some of the things that caught my attention are: The 4.1 Android Jelly Bean OS that comes with it makes up for a lot other than waiting for upgrades that never arrive. The 1.0GHz dual core processor, 1GB of RAM and 4GB of ROM expandable means that the phone isn’t slow and doesn’t have to freeze all the time. I should be able to load it with all my favorite apps and entertainment. The huge 5.0 inch HD display would give me enough room to work and play.

The 8MP back and 1.2MP front camera are much of a standard and we would have to see the performance first but yes that was impressive too. Despite resemblance to the Galaxy S4, the Slim 9.1mm body and design feels like I am not holding some cheap plastic. The battery is 2100mAh but that again depends on  if it can stand heavy usage. All these however boil down to how well the phone will perform when one actually gets to use it.

On the down side, the phone comes with no 4G/LTE I guess that will be in their next flagship phone. On whether this is enough for Tecno to clearly make its mark and gain a market share in the African market, will be for the users to decide.

There are some things that come standard when you want to claim the African market: First and foremost the platform matters so going Android is a good start. Secondly, the price and options; This is Samsung’s strategy they have a phone for everyone and I believe that Tecno should do the same make both High end and mid range or even entry level phones that could be as little as $50 (I mean they are good at making cheap/affordable)

Availability:They should choose their distribution channels very carefully so as to make the phone readily available

Advertising: Adoption of the brand is going to greatly depend on how they communicate the benefits of having a Tecno and that is going to cost them some good advertising dollars. Bottom line is that the Phantom is a good start but this is a long and costly battle I hope Tecno is ready