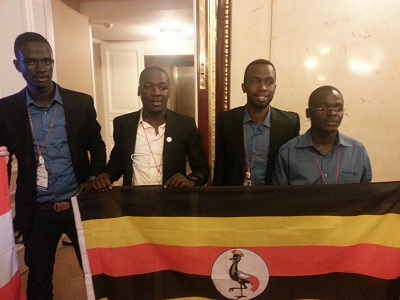 News coming in from Russia at the Microsoft Imagine Cup Awards Ceremony, Team Code 8 from Uganda won the  Women’s Empowerment Award. This was the 11th annual Microsoft Imagine cup which premiered competition from technologists, developers and aspiring entrepreneurs to create innovative projects and ultimately bring those ideas to market.

According to ItNewsAfrica, the winning projects were announced for the three major competition categories that is Innovation, Games and World citizenship. 800 students are reported to have participated in this year’s round from 71 countries all around the world.

Microsoft awarded the winners with cash and other prizes valued at $1million throughout the competition world wide.

Team Code 8 from Uganda won $12,000 with the project called Matibabu. They will be partnering with  UN Women, an award that recognizes student teams that created projects that best address issues impacting women globally.

Matibabu, after connecting a custom piece of hardware called a matiscope to a portable device, this equipment can diagnose malaria without requiring a blood sample.

Steve Guggenheimer, corporate vice president and chief evangelist at Microsoft is quoted to have said

For the past 11 years, Imagine Cup has been a place of inspiration and innovation for students around the world. The students participating in this competition demonstrate the very best in innovation from their home countries and together are creating new apps, innovations and services that will change the way the world works, interacts and learns. We are incredibly proud of the finalists who competed in Imagine Cup this year and stand in awe of the projects and technology they brought forth during this exciting week.

The overall winners of the 11th annual Imagine Cup Competitions are the following as posted by ITNewsAfrica.