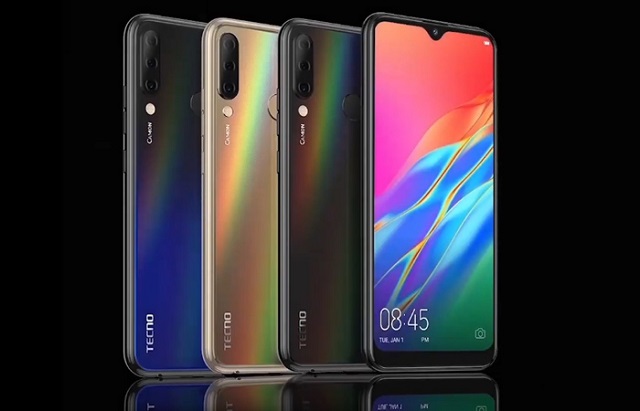 TECNO Mobile, a TRANSSION Holdings’ subsidiary has launched another version of the camera-centric CAMON series. The new triple rear camera CAMON device dubbed has been called the TECNO CAMON i4 in India.

The TECNO CAMON i4 comes with a 13MP main shooter with F1.8, an 8MP ultra-wide angle lens with 120 degrees view for capturing wide frames and landscape pics and a 2MP live focus lens that captures details for better portraits. On the selfie side of things, the TECNO CAMON i4 is equipped with an artificially intelligent 16MP selfie camera.

The TECNO CAMON i4 is the first TECNO smartphone to come with a ‘dot notch’. All other TECNO devices have been using the iPhone X style notch which has been criticized for encroaching on the display. This uses the same design language that was introduced by the TECNO CAMON 11 and the CAMON 11 Pro.

As always is the case with TECNO devices, the TECNO CAMON i4 is a dual SIM smartphone and comes with a dedicated microSD card slot that enables users to crank up the storage capacity with a card of up to 256GB.

It is exciting to see how affordable the smartphone has become. Chinese brands like TECNO have continued to throw in good specs to affordable devices. The CAMON i4 would be a great addition to Uganda where many consumers are very price sensitive.

However, we are not sure if this device will be in the TECNO shops anytime soon. Maybe it will come with another name? Maybe it won’t? What do you think about the TECNO CAMON i4? Let us know in the comments below.