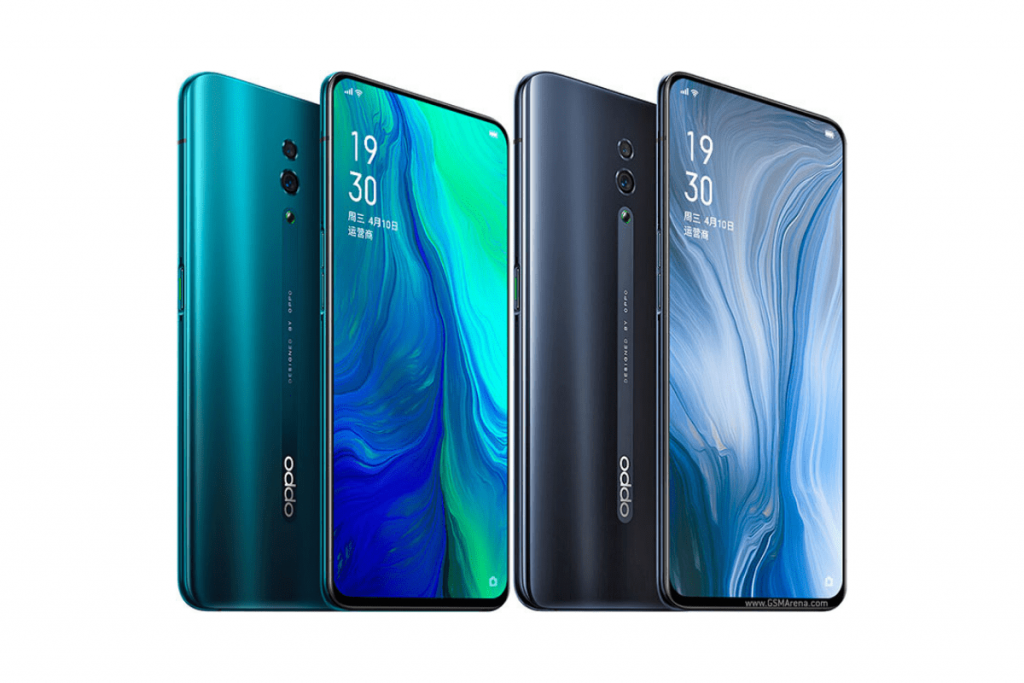 For this year, Oppo just unveiled its flagship smartphone series which are absolutely different from last year’s Find X flagship but has the pop-up camera in common even if they have a different way of doing that. The Oppo Reno smartphones are of three types which include the ordinary Standard Edition, 10X Zoom model and the 5G model which is yet to be released. As it appears, the Chinese OEM seems to be convinced that the pop-up camera is the future in flagships with its last generation of said flagship also carrying a similar pop-up camera setting.

The standard edition is smaller in size and accordingly weighs less too at 185g which is just about the normal for smartphones. This version of the Oppo Reno has a dual camera that entails a 48MP Sony IMX586 sensor and a 5MP depth camera. The pop-up selfie camera is a 16MP f/2.0 sensor with flash for both the front and rear camera. In addition, it has an AMOLED 6.4-inch screen with a 1080 x 2340 pixel resolution covering 93.1% of the surface thanks to the pop-up camera and slim bezels. To keep it on, the smartphone relies on a 3, 765mAh battery which charges with VOOC 3.0 fast charge technology said to be 23.8% faster than the predecessor.

You’ve got the smartphone in a range of colour options comprising of Fog Sea Green, Pink Mist, Extreme Night Black, and Nebula Purple. Inside, there is a Qualcomm Snapdragon 710 processor and either 6GB or 8GB of RAM. The former comes with 128GB or 256GB storage space while the latter has 256GB internal storage The 6GB RAM model with lesser storage goes for about $450 and $490 for more. On the other hand, for 8GB RAM, you would be paying close to $539.

Furthermore, there is the 10X Zoom model that sports a bigger 6.6-inch AMOLED screen with a Full HD resolution and the powerful Qualcomm Snapdragon 855 processor. This model is more or less poised to rival the Huawei P30 Pro which was recently released with its camera prowess. For that, it carries a rear 13MP periscopic zoom camera with a large f/3.0 aperture alongside an f/2.2 8MP super wide camera and the 48MP f/1.7 main camera that was also present in the Standard Reno model. However, the selfie camera remains the same with its shark fin pop-up style. Accompanying this is the combination of both EIS, OIS, 4K videos at 60fps and of course, the 10X hybrid zoom and other nice features.

SEE: Samsung to discontinue Galaxy J series merging it with the A-series.

Also, there is audio zoom and 3D audio recording using a triple mic system. The 10X Zoom model is pretty much thicker at 9.3mm compared to the 9.0mm on the standard model and weighs even more – 210g. Regarding the battery, you now have a 4, 065 mAh battery as well as the VOOC 3.0 fast charge. The storage and memory options available for the standard model is applicable here too only that the price differs. Starting from around $600 for the 6GB/128GB option, $670 for the 6GB/256GB variant and the 8GB/256GB combo demands about $710.

All of the smartphones in the Reno series have a Corning Gorilla Glass 6 on both sides with a 7000 series aluminum frame. There is the 6th generation of under display optical fingerprint scanner for security. The third in this series is the 5G model said to be released in Zurich in the coming weeks.