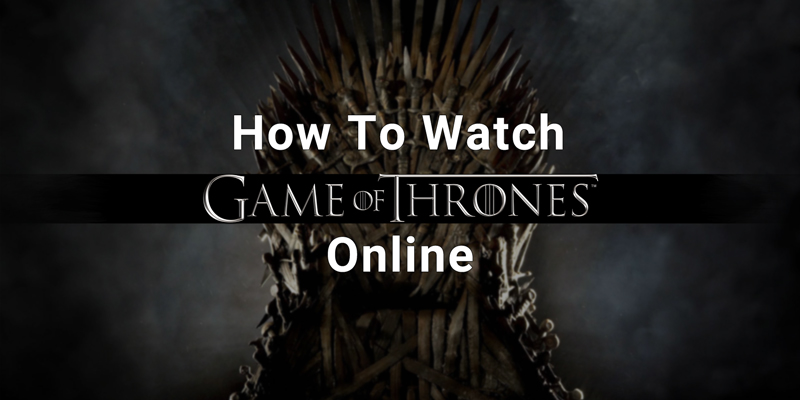 Filled with thrills, action, adventure, surprises, drama, lots of mystery and epic moments, audiences around the globe can’t wait to watch the battle against the Night King and his army of White Walkers — oh, his newly-acquired Dragon too😶. However, since the first (out of 6) episode of the final season of the series airs in a couple of hours, we bring some details about Season 8 of Game of Thrones and how you can watch it online.

How to Watch Game of Thrones Online

Want to find out who — from the seven(7) Kingdoms of Westoros — will win the throne? Here are some platforms where you can live stream the season finale of Game of Thrones.

HBO Now is Home Box Office Inc. standalone subscription service that gives you access of all of HBO’s series (Game of Thrones inclusive) on any connected device — smartphones, tablets, One, Google Chromecast, Android TV, consoles (PlayStation 4 & Xbox One), Roku, and Mac PCs. The HBO Now subscription costs $14.99/month and comes with 7 days trial for new customers. No cable or satellite TV subscription is required to use HBO Now. Simply log on to HBO’s website, subscribe to Now plan and watch Game of Throne live as it airs/

Sadly, the HBO Now platform is only accessible to viewers in the U.S. and certain U.S. territories. You can, however, get creat and bypass the geo- using Virtual Private Networks (VPNs).

This is another HBO streaming service available to U.S. viewers only. However, unlike HBO Now, HBO Go is free and can only be used if you have an active HBO subscription as part of your cable or satellite TV package. On HBO Go, you can catch up with previous seasons of the series as well as live stream episodes of the new Season 8 as they air. Simply log into the HBO Go app (on your smartphone, tablet, console, TV ) and select Game of Thrones.

If you use or have an active plan on Hulu’s streaming service, you can add HBO as an add-on to your package for an extra $15/month and watch episodes of of Thrones as they air. Sadly, if you live outside the U.S.A and Japan, you cannot use Hulu as it is restricted to both regions. Again, you can bypass the geo- using a VPN.

For Game of Thrones lovers that aren’t resident in the U.S., you can previous seasons of the series on Showmax. Likewise, you can watch/stream new episodes of the series on the Showmax as they air worldwide. Showmax is available in a total of 65 countries — Europe, Australia, New Zealand, North America, Canada 36 African countries — with a monthly subscription cost off or R99 or $7.99 per month (14-day trial inclusive).

Sony’s PlayStation Vue streaming service is another online platform to watch the Game of Thrones series online. The most premium plan (Ultra bundle) on the PlayStation Vue platform costs $80/month and comes with HBO. on the , you are subscribed to other bundles, you can include the HBO channel as an add-on for an additional $15/month.

Other platforms where you can watch Game of Thrones online as they air include Amazon Prime Video, Direct TV Now, Sky Atlantic, Sky Go, M-Net, SlingTV (U.S. only) and, Foxtel (in Australia).