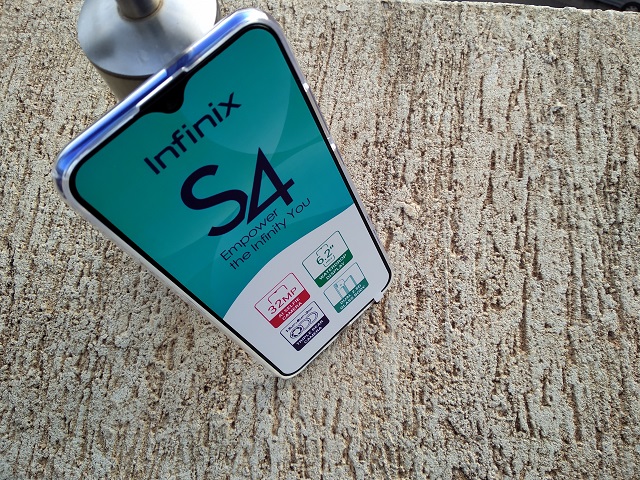 One of the most noteworthy trends in the smartphone space has been the voyage towards full-screen displays and tiny cutouts. While most of this shift has been most visible in the upper midrange and flagship section, Chinese company Infinix is continuing to buck the trend with the launch of its new Infinix S4 flagship, offering a smaller water drop notch.

The Infinix S4 continues the company’s S-series trend of offering a potent selfie camera. It comes with a staggering 32MP selfie camera. This is one of the most powerful selfie cameras in Uganda right now (at least according to pixel count). The initial selfies I took looked better than what my Redmi S2 with a 16MP camera could take. However, I will run some further tests in different lighting to see how powerful the camera really is.

Flipping the phone, the Infinix S4 offers a triple rear camera setup. The camera trinity contains a 13MP main shooter, an 8MP wide angle lens and a 2MP depth sensor. This is the first triple rear camera phone to be launched in Uganda. We haven’t done so many tests with this camera. However, the triple rear setup combined with a 32MP camera in the water drop notch makes for a forceful optics department.

The new phone offers a 6.2-inch HD display with a water drop notch at the top. This is the first time we are seeing more progress towards a true full display phone from Infinix. The Infinix S4 is one of the most affordable devices to feature a water drop notch in Uganda.

The display is a marvel at this price point. However, a 1080p screen would make the display even more spectacular. Not that the 720p display is bad, we have come to expect more from smartphones these days. The display is exciting but we shall test the viewing angles and its usability in the bright sun.

Infinix’s S4 phone seems to deliver in the power stakes too, offering a MediaTek Helio P22 chipset, 3GB of RAM, 32GB of onboard storage, expandable via a dedicated memory card slot up to 128GB. A 4,000mAh battery runs the show. This is a big enough battery and I haven’t made a trip to the socket for over 6 hours without an initial charge. The phone is phone feels snappy and doesn’t lag when switching between apps. We shall have performance tests which we shall put in the review.

The blue unit we received looks elegant. The phone feels rather light in the hand but still comfortable to hold and use. The company has priced the Infinix S4 at UGX 585,000. Are the powerful cameras and new XOS 5 Cheetah worth it? Let us know in comments.