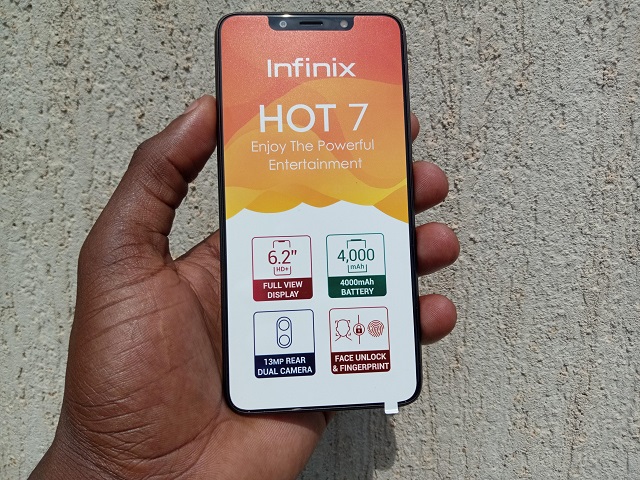 We have exciting news for all the budget conscious smartphone buyers and Infinix fans, Infinix Mobility finally unveiled the Infinix Hot 7 in Uganda and it’s available at many Infinix stores countrywide.

Appearance-wise, with a plastic black backplate, the Infinix Hot 7 is definitely a bit of a departure from Infinix Note 5 characteristic glossy design. It was made from the same material as the Infinix S3, Hot 6 and Hot 6 Pro. The Hot 7 certainly isn’t as distinctive or visually appealing as the Tecno Camon 11.

Under the hood, as expected, there’s a quad-core Cortex-A7 processor. clocked at 1.3GHz and a massive 4,000mAh battery running the show. We will publish a hands-on review, with the full hardware and software specs.

The bigger story with the Infinix Hot 7, though, is that it a very affordable device with awesome specs (for the price). It debuts at a dirt-low UGX 439,000 price which UGX 29,000 less than its predecessor. Other bragging rights of the Hot 7 include a large 6.2-inch bezel-less iPhone X style display and a dual 13MP+8MP rear camera setup.

The Infinix Hot 7 will be available in black, blue, champagne gold and purple colour options. Let us know which colour is your favourite in the comments section.

If the Hot 7 is as successful as its forebears, there’s no reason that Infinix’s massive growth spike won’t continue. Given that Women’s Day 2019 is around the corner, it may be no surprise that the Infinix Hot 7 gets a share of the day’s shopping. Of course, low priced phones like the Android Go A16 are expected to dominate the numbers.

Nevertheless, the Infinix Hot 7 appears to be solid bargain Android handset, at least so far, and it’s going to be the main rival of the new Camon 11 family – a family battle that’s been fought in the last couple of years by their predecessors.