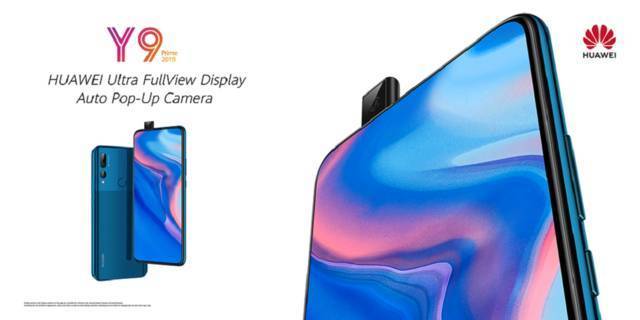 Despite Huawei’s impending peril once the 90 days grace period before the US Ban is effected, the giant Chinese OEM continues to push out devices and this time, it is the Huawei Y9 Prime 2019.

The Y9 2019 Prime has already been out in several markets for a while now. It is meant to take on the likes of Huawei’s own P30 Lite, the new Galaxy A devices and Oppo’s F11.

The Y9 Prime 2019 will ship with a large 4000 mAh cell, 4GB or RAM and 64/128 GB of internal memory, a triple camera at the back (16 MP wide angle, 8 MP ultrawide and 2 MP for depth information) as well as a rear-mounter fingerprint sensor and USB Type-C. The package, which runs Android 9 Pie and EMUI 9 is powered by Hilisicon Kirin 710F, and is, in every bit, a worthy upgrade.

Huawei says it has changed a lot of things with the new model: to begin with, the screen, which is still at 6.59” occupies the expanse of the front panel. It is an immersive experience with skinny bezels and no notch. Companies have been eliminating the screen cutout to achieve all-screen displays, and maybe because notches, while they can be deactivated, are not very eye-pleasing.

The front camera is slotted in the top edge in a pop-up mechanism as we have seen in OPPO F11 Pro, which costs more than Y9 Prime’s expected selling price. It is also worth noting that motorized selfie snappers have been reserved for high-end phones for some time now. We are glad that the technology is trickling down to affordable devices, and we should be seeing more of this as design shifts towards achieving infinity screens that shrink the size of phone while offering expansive displays.

Speaking of the soon to be launched device in the market, Huawei Mobile Country President, Steven Li said, “Huawei, a brand known for meaningful innovations for its users is constantly working at improving the smartphone experience. With the soon to be launched Y9 Prime 2019 we have paid close attention to camera and display that is aimed at attracting consumers who are looking for some of the most innovative features.”

As part of the marketing campaign, Huawei is asking people to guess the price of the upcoming device. It is still unclear whether persons who correctly guess the price will stand a chance to win the device as has been the case prior to the launch of some of their previous devices this year.