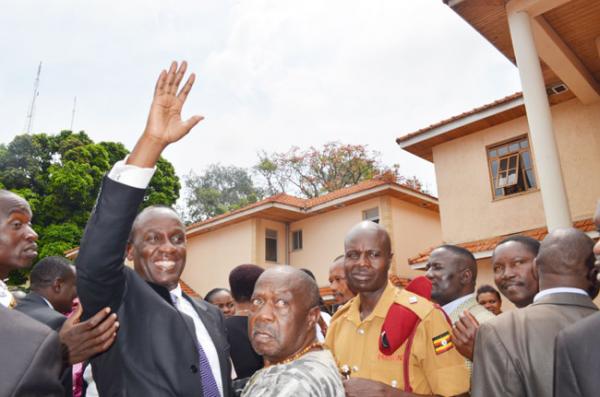 Some call it the university of understanding, the mainstream calls it prisons. Mike Mukula’s life completely changed for the 2-3 months he was confined in Murchison Bay Prisons in Luzira. Upon his acquittal, he vowed to change inmates’ appalling state of affairs.

When prisoners are locked up in jail, the world seems to cave in unto them. The radio is the popular source of access to information. It fills the void left by the restrictions to information access in Prisons. During his term in prison, Uganda’s former minister of state for health Mike Mukala faced one of the strangest times in life, worse more, in dilapidated facilities. Being known as one of the most influential African leaders on Twitter and also for a flashy lifestyle, he couldn’t imagine life without the vital key sources of information –the internet and T.V.

Today, was a day of joy for both the prisoners and officers at the launch of the project to acquaint officers with information via internet access. Mike lobbied for internet connectivity for the penitentiary in conjunction with  MTN Uganda. He contributed six desktop computers that are fully connected to the internet thanks to MTN’s internet services. He promised to add another consignment of six computers to beef up usage. The event was graced by dignitaries from MTN Uganda, Uganda Prisons Service and well wishers.

The composed and jolly ex-convict is known to have brought in DSTv for all inmates for purposes of keeping abreast with the world’s affairs besides entertainment. Truly, his big heart has changed the social conditions in Uganda prisons.

Image via Chimpreports: Mike Mukula upon his acquittal.