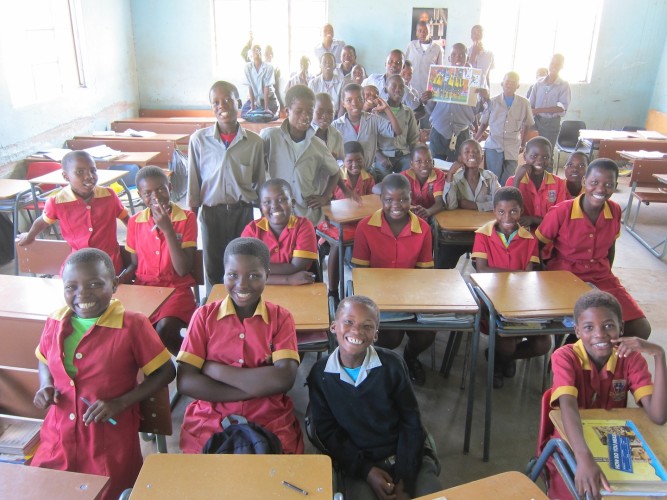 The rural school of Sidvokodvo, Swaziland is like many other rural schools in the developing world: short on resources, making to do with very little, and full of kids who are eager to learn but lack the proper tools to ensure a well rounded education. Many students here don’t complete primary school and fewer and fewer still graduate from high school or university. Those students are often left without employable skills and are left behind in a country that is struggling with an unemployment rate of over 70% and the world’s highest prevalence rate of HIV.

But things are changing, albeit slowly.

Piers Duffell, an American volunteer living in rural Swaziland. Together with some friends and colleagues have started a crowd funding campaign on (Indiegogo) to bring a Rasberry Pi computer lab to the students of Sidvokodvo. They call it Swazi Pi.

This lab will be an inexpensive, repeatable, and fully functional resource for the students. It will have free software such as Linux, typing tutorials, offline versions of the Khan academy for mathematics and science, and offline versions of Wikipedia for research and browsing – as well as games and the opportunity for students to learn to program.  The lab will help bring an end to computer illiteracy; a heavy impediment in an increasingly digital world.

To ensure this project will be the school has put forth several teachers who are willing to be trained to operate and maintain the lab. These teachers will ensure the students will continue to impart basic computer skills in order to better prepare their students for their future.

Some readers may be asking: Why Rasberry Pi? Why not use refurbished computers or the One Laptop Per Child (OLPC) devices?

We chose the Rasberry Pi over refurbished computers because of their versatility and ease of use. Refurbished devices may come from different manufactures and will likely have unique properties and problems that would make them impractical for a basic computer lab. The work hours needed to maintain several separate devices is much higher than the work hours needed to maintain several identical devices. On top of this, Africa is not a dumping ground and needs the best devices available unless we are content to keep the continent in the dark and far behind.

The OLPC is an incredible organization that produces a remarkable device. It runs a version of Linux, just like the Raspberry Pi, is very inexpensive at around $200 a piece, and has had some tremendous success. That being said OLPC markets its products directly to the government of various countries and can produce an inexpensive machine by taking advantage of economies of scale. This keeps the computers from being for small-scale initiatives. Swazi Pi will use computers that are less expensive and more accessible for small-scale projects, which means we can get computers and training to kids without navigating the Ministry of Education or ordering thousands of computers.

Editor’s note: This is a guest post by one of the people behind the campaign, Piers Duffell, an American volunteer working in Swaziland. If the Indiegogo campaign exceeds the target, the money will go towards buying more Pi to increase the number of machines in the lab