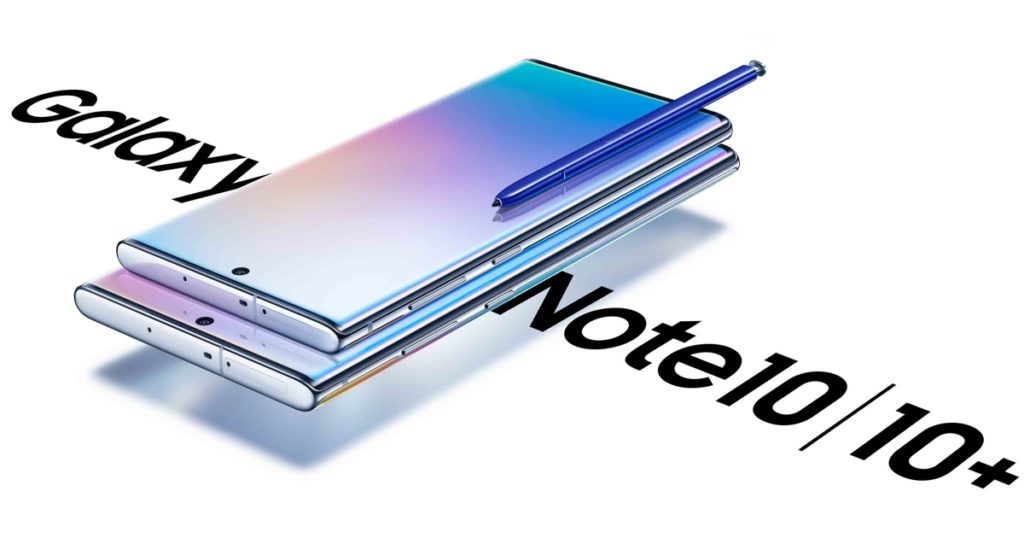 After months of unending rumors, leaks, and expectations, Samsung finally unveils the newest member of its flagship Note series. And for the first time ever, Samsung is spicing up its Note line of smartphone by unveiling the new Galaxy Note 10 flagship in two different variants. The first variant is the regular Samsung Galaxy Note 10 while the second/bigger variant is dubbed the Galaxy Note 10+.

Size-wise, the new Galaxy Note 10 is just about the same size as its predecessor, the Note9. The Note10 comes in three colour options (Aura Glow, Aura White, Aura Black) with a 6.3-inch Always-on display that’s covered in Corning’s Gorilla Glass. Asides the bezel-less design, another aesthetically pleasing feature of the Galaxy Note 10 display is the punch-hole located at the top-center of the screen

The Galaxy Note10 and Note10+ are the first-ever flagships from the Note series to launch with triple rear camera.

Powering the Galaxy Note10 is Qualcomm’s Snapdragon 855 SoC, a 2.8GHz Octa-core CPU, and the Android Pie OS. There’s also an Exynos 9825 CPU variant of the device. The Note10 has no micro SD card slot neither does it come with a 3.5mm headphone jack. According to Samsung, it eliminated the headphone jack on the Note10 so the device could house a bigger battery.

The storage available to users instead is 256GB of internal storage and 8GB of RAM. Beneath the glossy glass body of the Note10 is a 3,500mAh battery with 25W fast charging and support for wireless charging.

The Galaxy Note 10 and Galaxy Note 10+ share quite a lot of similarities with only little differences. Compared to the original Note10, the Galaxy Note 10+ comes with a bigger display, larger body, a ToF camera, bigger battery, faster charging, bigger storage capacity, and SD card support. Every other thing stays the same.

There’s a 6.8-inch AMOLED display with a top-centered punch-hole on the front of the Galaxy Note10+. The device has a 10MP front-facing camera and the same triple rear-camera configuration as the regular Note10. There is, however, an additional 3D Time of Flight camera on the Note10+.

The Note 10 Plus comes with a 4,300mAh battery with support for 45W Super Fast Charging. According to Samsung, you’ll only need to charge the Note 10+ for 30 minutes to use it for a whole day. How amazing is that?

The S Pen comes has a motion sensor which it utilizes for gesture support. With the pen, you can remotely do things like zoom (in & out of) a photo, control & edit videos, create AR doodles, change handwriting to text, switch between main camera & selfie camera, and do a bunch of other cool things. They also get a more advanced video editor that can also leverage the S Pen makes for quicker selecting and trimming.

A 5G version of the Note 10+ is also expected to be launched later this month and is expected to retail for about $1,300.

What do you like or dislike about the new Galaxy Note10 and Note 10+ flagship devices?