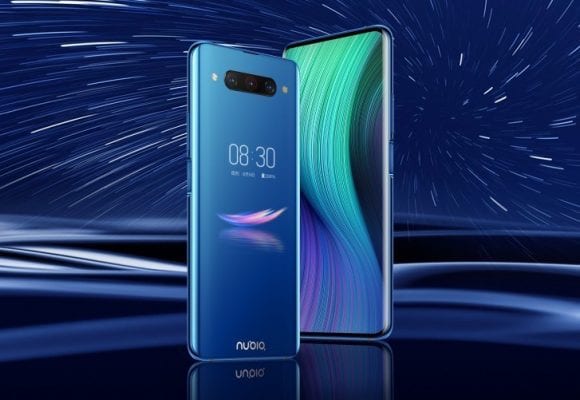 Following the announcement of the Samsung Galaxy Note 10 and Note 10 Plus yesterday, Nubia which was once a brand under ZTE releases its latest flagship a few hours later. To be quite honest with you, this smartphone offers quite a decent value for the price more than the Galaxy Note 10. That said, the Nubia Z20 takes after the Nubia X of last year with the front and back display style.

Putting the best foot forward, the smartphone comes with a nice full view front display with no notch or punch hole interruption. A large 6.41 inch AMOLED screen is stationed at the front with a Full HD+ resolution alongside a 5.1-inch HD+ AMOLED screen on the back. Furthermore, the smartphone is pressure-sensitive at the sides and sports a fingerprint scanner on both sides. There is a USB Type-C at the bottom but no headphone jack and it weighs just 186g altogether.

There is no front camera on this smartphone, but don’t panic, that’s why you have a second screen. In that regard, you will be using the display at the back as a view screen whenever you want to take selfies with the rear camera. There are three cameras on the smartphone lined side by side just above the second screen. You’ve got a 48MP main cam with OIS, PDAF, and a f/1.7 aperture as well as an 8MP telephoto lens with 3x optical zoom and a 16MP ultra-wide shooter having a 122.2 degree Field of View (FOV).

For performance, there is a Qualcomm Snapdragon 855 Plus processor in play which is more powerful than what you have on the Galaxy Note 10. In addition, it comes with a 6GB and 8GB variant which can either feature 128GB or 512GB of storage. Also, it is powered by a 4, 000mAh battery which has the luxury of 27W fast charging. The selling price here is set at $498 for the 6GB/128GB model and $525 for the 8GB/128GB variants.