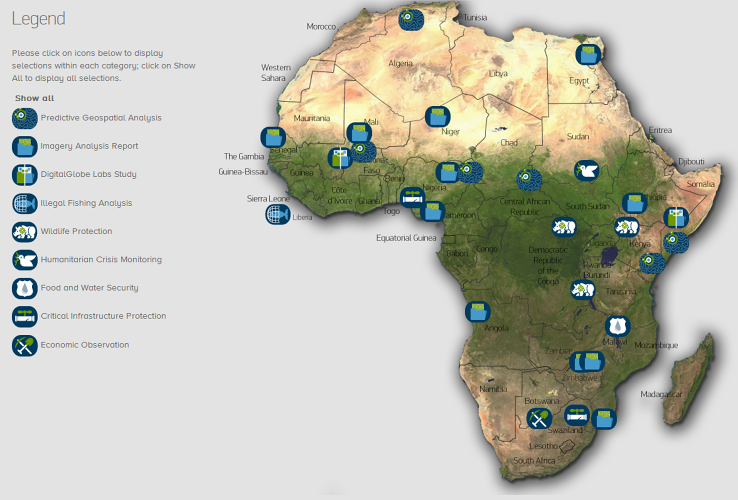 Prophecy may still be qualified to those with divine powers, but modern technology has blessed us with clever systems that can make accurate guesses about the future.

DigitalGlobe is an agile mapping company whose sophisticated constellation of imaging satellite is a key interest to companies such as Google, Bing, Nokia, Esri among others for their heavy reliance on maps. According to FastCoExist, It also has a healthy business keeping global militaries and intelligence agencies appraised of what’s happening on the ground. Now the company wants to add energy companies, utility providers, insurance agencies, and others to its client mix. In order to show off what it can do, DigitalGlobe created a showcase of its work in Africa for potential clients. The idea: DigitalGlobe’s work with predictive analytics, demographic, and infrastructure overlays will convince private companies to sign on for their services.

Africa has the fastest rising economies in the world and it has therefore been a center of interest by many developed countries. The western world is keenly watching the calculated steps of Chinese investors who have birthed a meteoric rise in bilateral trade agreements with the government of China.

The company’s African showcase, shows a mix of information available to DigitalGlobe customers. There is information on terrorist attacks by groups such as Boko Haram and the Lord’s Resistance Army, links to recent satellite imagery–much of it taken in recent months–and overlays explaining population, military movements, and more. Other parts of the company’s African work, not displayed in the showcase, include predictive data analytics sets for current events on the continent.

In the meantime, DigitalGlobe is putting that predictive analytics technology to interesting use, like predicting theft from Nigerian oil pipelines and predicting violence from Boko Haram and other organizations. Alongside intelligence agencies, non-governmental organizations make up a significant portion of large DigitalGlobe customers; one client is George Clooney’s Satellite Sentinel Project, which monitors alleged human rights violations in the Sudan.

On the other note, some reports confirm that GPS tracked digital footprints eased on the zeroing down of fallen war monger Jonas Savimbi. It is alleged that the rebel leader was tracked by the satellite service that he was using for voice communication. This subsequently led to his death by the Angolan army.