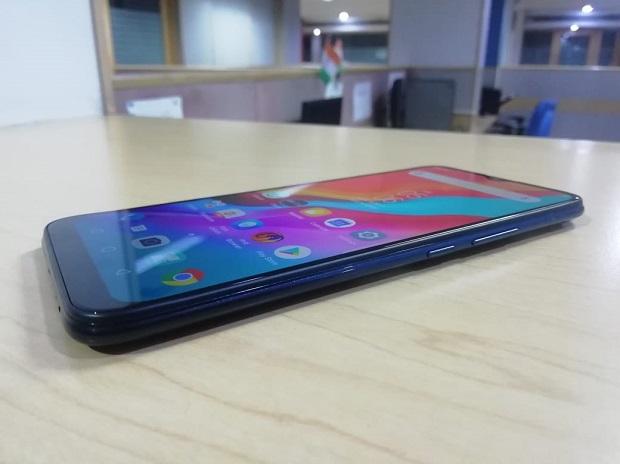 Infinix recently announced the Infinix Hot 8 as its newest member of the Infinix Hot series smartphones. It is very affordable and comes with a triple rear primary camera module. I spent some time with the device, and here’s its unboxing and first impressions.

What comes in the Box?

Before we look at what comes in the box, let’s look at what is outside the box. The top and sides of the box have the Hot 8 branding. The back has some of the specs written on it. For example, the memory, connectivity, processor, and display among others.

The box of the Infinix Hot 8 comes with a charger head, a micro-USB cable, a SIM ejector tool, product documentation, a transparent protective case, earphones, and the phone.

The Infinix Hot 8 has a polycarbonate body with a gradient finish. Above the screen is a small waterdrop notch that has the front camera.

The volume rocker and power keys are situated on the right-hand side. The micro-USB port, speaker, and a 3.5mm headphone port are placed at the bottom edge. The SIM card tray is on the left-hand side. It has a large 6.52-inch display with HD resolution and an aspect ratio of 20:9.

This device contains XOS Cheetah v5.0, which is based on Android 9 Pie. It also comes with some additional apps that unfortunately can’t be uninstalled. It has MediaTek’s Octa-core Helio P22 processor and supported by 2GB of RAM and 32GB of internal memory.

The camera is pretty decent, most especially the rear cameras. I was able to take a couple of shots which I will share with you in the full review.

The device 8 has a triple camera set-up at the back which is vertically-aligned and comprises of a 13MP f/1.8 main sensor, a 2MP depth sensor, and a low-light shooter.

On the front, it has an 8MP camera bearing an aperture of f/2.0, an 81-degree field of view, and a 4P lens. The camera app on the device comes with different modes such as; AI CAM, Beauty, Bokeh, AR Shot, Panorama, and Video.

Hot 8 supports dual-SIM slots which are both 4G VoLTE. It also has support for Wi-Fi, Bluetooth 5.0, and A-GPS with GLONASS. There’s a fingerprint sensor at the rear.

Infinix Hot 8 has a massive 5,000mAh battery which should be able to last two days of moderate usage.

The Infinix Hot 8 is priced at UGX 450,000 (122 USD approximately) which is a pretty good value for money based on the above specifications. You can get the phone on Jumia Uganda, Jumia Kenya, and Jumia Nigeria or any smartphone retail shop nearby.

The Infinix Hot 8 comes pre installed with some apps. Most of them are relevant while the relevancy of some depends on you the user – whether you like them or not.

It comes with a camera app, messages app, some games, Boomplay, calculator, calendar, contacts, WhatsApp and others. Some of the apps that come preinstalled unfortunately can not be unistalled while others like the games can be installed.

Infinix Hot 8 has a finger print scanner at the back of the phone. Is also supports Face unlock but cautions you about it’s unreliability. You can also be able to set a pattern or PIN depending on your preference.

In summary, the Hot 8 features a big display, triple camera, great design, big battery, among others. Expect an in-depth review and analysis on the device soon.