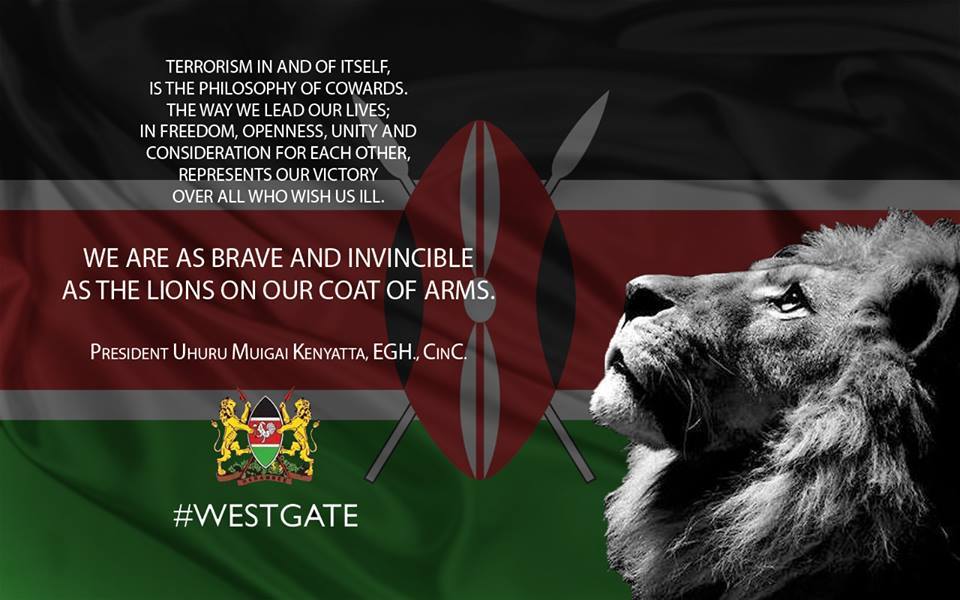 What started as a commemoration of the international World Peace day was to be turned into a Black Saturday, a day of bloodbaths. At around noon time (9 GMT), an affluent mall; West Gate, popular with wealthy Kenyans, expatriates and tourists was sealed off  by a notorious gang of  trigger happy terrorists who especially targeted non-Muslims. With over 68 dead and 150 injured in the attack, more than 60 are still missing despite the signals that the mission is in it’s final stages.

Al Shabab, via their twitter press account, were quick to boast of their achievement and warned of more terror towards those against their rule in Somalia. Twitter, immediately suspended their account later on Saturday. In retribution, another account was opened almost immediately.

Social media was kept awash with a myriad of tweets from various news agencies and individuals situated in Nairobi and sympathisers across the globe. Regardless of the differences in religion and culture amongst others, Kenyans (Kenyans On Twitter a.k.a KOT) united for a common cause of peace and encouragement to the bereaved families under the hashtag #WeAreOne #Westgateattack.

Whilst, social media has played as a huge platform in keeping the world informed about the events unfolding at Westgate mall in real-time, the terrorists are using it to their advantage too to exchange vital intelligence information. In fact, experts have called on the social media users to ignore Alshabab’s threats regardless of  the paranoia that has gripped many.

US loves the social media account of terrorists on and not closed because they are a source of great intelligence. #WestgateAttack

The dire need to refill then waning blood banks in Kenya drove Red Cross to launch a blood donation drive which registered over 1000 donors and other well wishers contributing items such as food, clothes and several other basic needs. Through twitter too, Safaricom canvassed for financial donation through it’s mobile money service –MPESA–which has by far received more than KSHS 420,000 ($435,000) in direct transfers from within and abroad.

Despicably, the nation’s leading daily, Daily Nation, published a gruesome picture of a woman drenched in blood for their Sundays paper cover picture. However, it was not only condemned by the general public but also sought for a public apology from top management that responded in affirmative and also firing the editor.

The western media was quick to craft headlines that would be popular in the international media and henceforth neglecting the main story — numerous deaths. For example The New York times and USA Today. These actions are reminiscent of the election polls this year where they falsely reported about eruption of violence whereas the polls were rather the opposite. It was for this same reason that KOT came up with a memetic hashtag #TweetLikeAForeignJournalist

Terrorism in and of itself, is the philosophy of cowards. The way we lead ourselves; in freedom, openness, unity and consideration for each other represents our victory over all those who wish us ill. We are as brave and invincible as the lions on our coat of arms. —  Kenya’s President Uhuru Kenyatta, an avid twitter user, in his address calling for unison.

Editor’s note: The attack came to an end, however, there are still contradictory reports about the exact number of terrorists and those still missing. The ministry of internal affairs will release a report subsequently.

One thought on “#WeAreOne: How Kenyans united against terrorism on social media”