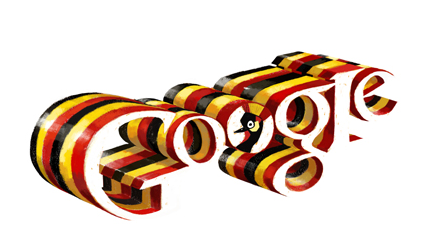 It was on this day in 1962 when the Union jack was lowered and the Uganda flag hoisted as a symbol of independence from the British rule.

Thus far, Google is commemorating Uganda’s 51 years of independence with a doodle. The doodle embodies the 2 strips of Uganda’s three colours of heritage — Black, Yellow and Red. Where black signifies the colour of the skin (race), yellow signifying the ever shinning sun through the year since Uganda is located along the equator and red signifies the brotherhood and unison of the people.

The doodle is tilted at angle to the right that signifies forward movement, just like that demonstrated by the Uganda crane (the bird in doodle) on the Uganda coat of arms. Besides, the tilt is whimsical too!

This year’s independence marks the third Uganda independence doodle since 2011, however, from the Doodle collect; Uganda has been featured five times.