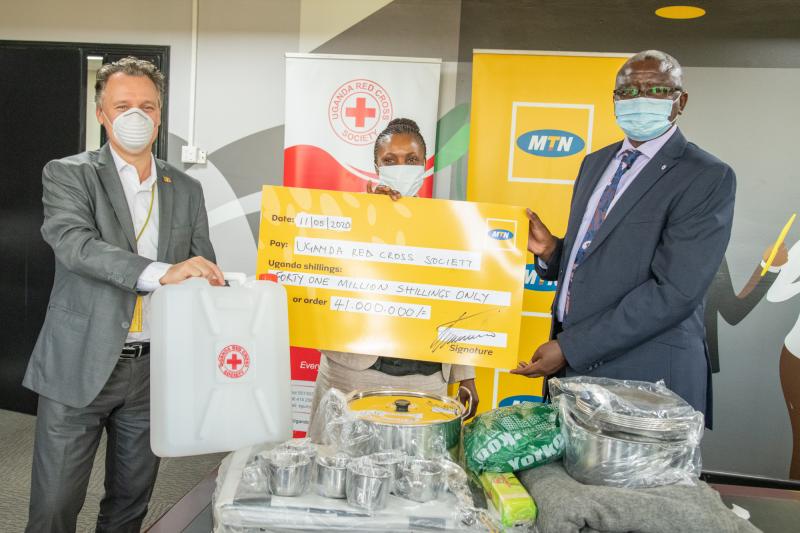 MTN Uganda through its Corporate Social Responsibility arm, the MTN Foundation has donated Shs. Ugx 41,000,000 million towards the Kasese floods victims. This money will be used to buy non-food relief items to support the families that have been displaced.

The devastating floods ensued after River Nyamwamba burst its banks, following the heavy rains that hit the Rwenzori Mountain ranges.

Over 24,760 households with approximately 173,320 people were affected by the flash floods. Almost up to 150 houses were destroyed in Karusandara division while another 92 houses were completely washed away in Nyamwamba and kilembe areas. The displaced people have sought shelter from nearby churches and school buildings following a directive from Hon. Musa Ecweru, the state Minister for Relief and Disaster Preparedness during his visit to the area last week.

It is against this premise MTN Uganda, through it’s foundation that aims at improving the lives of the communities within which it operates by supplementing government efforts in priority areas including disaster responses has urgently come in to reach out to the  Kasese floods victims with relief aid.

While handling over the dummy cheque to the Red Cross and Officials from the office of the Prime Minister, MTN Uganda’s Chief Executive Officer, Mr. Wim Vanhelleputte said remarked that facing such a disaster in these unprecedented times when the globe is grappling with the Covid19 pandemic and the country in a state of lock-down, spells double tragedy for the people of Kasese, thus prompting urgent relief from mtn and all other stake holders to save the lives of people.

This was during a dummy cheque handover at the Nyonyi Gardens MTN offices in Kampala this morning.

“As MTN Uganda, we stand with the people of Kasese who have suffered great loss in the recent heavily destructive flash floods. We understand that this is such a trying time, especially since we are already battling the devastating effects of the Covid19 pandemic. We hope that this modest support we have rendered will offer them some comfort,”

While receiving the cheque, Robert Kwesiga, Uganda Red Cross Secretary General appreciated MTN for always coming through very fast to support whenever the Country has emergences.

“This is not the first time MTN Uganda has supported people affected by disasters. Last year they supported Bududa twice, supported Bundibugyo and today they are supporting Kasese. This consistent commitment is a true humanitarian spirit exhibited by MTN to support it’s community. Amidst this period when all partners including MTN have heavily invested in the COVID-19 fight, MTN has still managed to support Kasese. We want to thank you.” Kwesiga said.

The money shall be used to procure 100 standard household non-food-item kits to reach out to 100 most vulnerable families comprising of children, youths, women and the elderly. Each of the kits contains 2 cooking pots, 6 cups, 6 plates, 1 knife, 1 ladle, 2 jerry cans, 3 blankets, 3 mosquito nets, 3 bars of soap and 1 tarpaulin for shelter.

In 2013, the MTN foundation spent about 250m to support the kilembe mines hospital which had been affected by similar floods through refurbishment of the children and maternal ward and provided items to support the hospital inclusive of 100 hospital beds, mattresses, mosquito nets as well a generator.

On behalf of the Government of Uganda, the Ag Commissioner for Disaster Preparedness Ms. Rose Nakabugo extended warm heartfelt appreciation to MTN Foundation for the support to the people of Kasese.

“This is very timely. We thank MTN and commit that the donated items will right away be delivered to Kasese to help people cope through this situation. Thank you for complementing our efforts.”

Feature image: MTN CEO, Wim Vanhelleputte (L) displays the contents of the relief kits that will be distributed to the flood victims in Kasese district.jpg