The long wait is finally over for desktop operating system enthusiasts. Ubuntu Linux version 14.04 LTS (code named “Trusty Tahr”) has been released and available for download on the Ubuntu website.

In an earlier post, we mentioned a few new features that are shipping with the new shinny OS, such as an enhancement in the Unity interface that lets users re-size icons to their choosing, local application menus, anti-aliased windows, integrated search that enables users to search the web and their PCs, latest Libre office productivity suit among others.

This latest release of Ubuntu Server is heavily focused on supporting cloud computing(with openstack), mobile phones & tables, 64-bit ARM-based microservers support, and more. Canonical’s idea is to bring about the convergence of personal and mobile computing. Its mobile operating system — Ubuntu touch — was expected to be launched together with the desktop version, but it seems time couldn’t just allow for this to happen.

Canonical’s release of its latest Free/opensource Operating System comes at an opportune time when Microsoft decides to end the life-cycle of Windows XP — arguably its most successful operating system ever. The end of XP support means thousands, if not millions of machines running the OS are hackers-day-out for hackers out in the wild. In a survey Dignited carried out last month to ascertain the desktop operating system marketshare in Uganda, the results are quiet stunning. The results taken by 44 respondents from emailing lists and our social media channels show XP taking 3rd position while Ubuntu surprisingly spots the 2nd position and Windows 7 takes the 1st position. 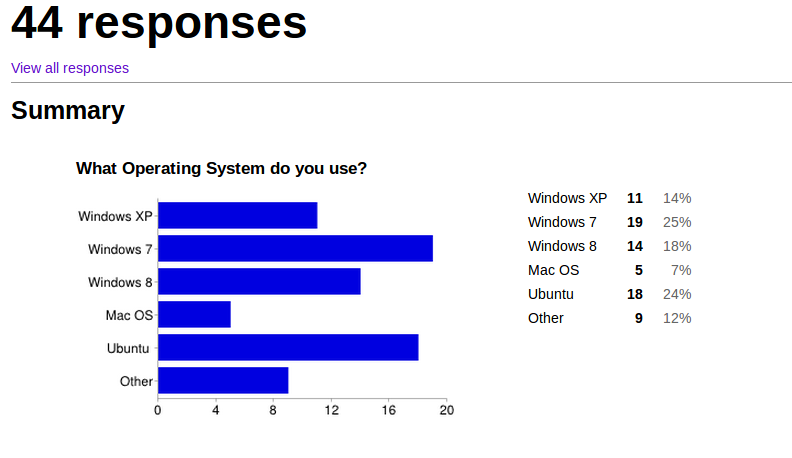 Of course XP users can adamantly continue running the OS, but will incur high maintenance costs as Simon Vass, a senior cloud support engineer said in an email comment;  “The main problem with this option is that Microsoft will no longer produce any updates especially security updates. As such extra special attention should be made to maintaining Antivirus and Malware tools”.

Newer versions of Windows like Windows 8 require computers with high-end specifications which isn’t a viable option for those with low-end desktops. The other option is to switch to Linux-based Operating Systems that can still run smoothly in low-end hardware as Simon put it; “The second would be to consider switching to using Linux. More and more organisations are considering using Linux as there main OS. Recently Munich successfully completed there primary transition from a mainly Microsoft based platform to one running Linux and OpenOffice.”

The latest release of Ubuntu brings the best open source technologies together on one platform, with the benefit of free updates for 5 years. Ubuntu 14.04 LTS can be installed alongside Windows, as a standalone OS or on a Mac. So why not start here.