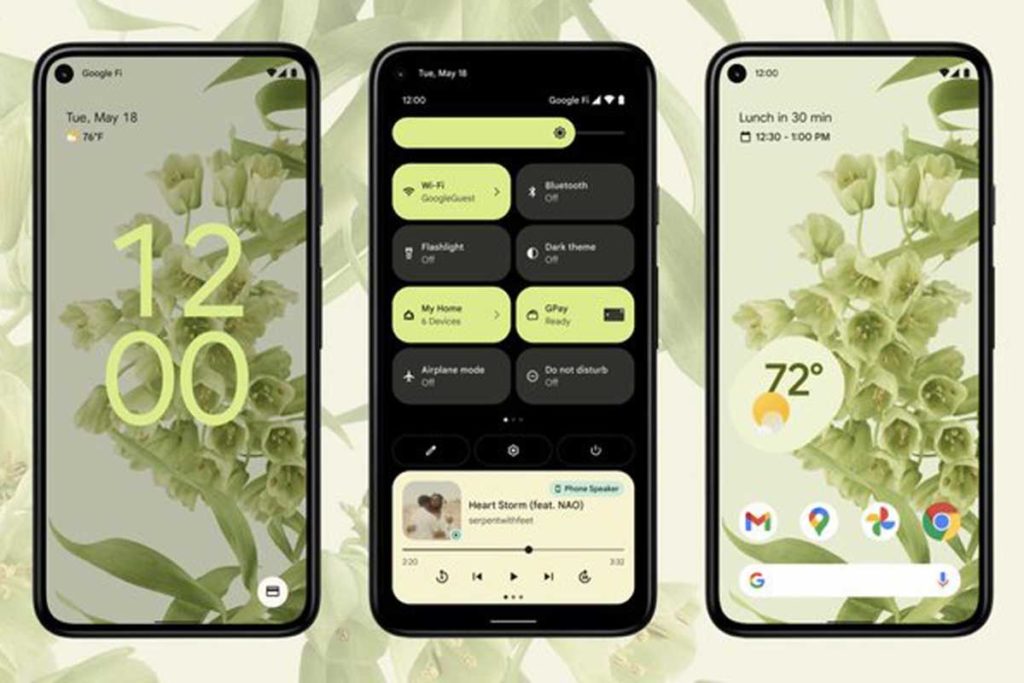 Google unveiled a couple of things during its annual developer conference – the all-new Android 12 OS being one of them. In this article, we will be looking at the three big changes coming with the revamp of the Android 12.

This is the first major UI revamp Android has had in a long time – the most recent UI revamp happened in 2014 with the Android Lollipop. This new revamp is called ‘Material You‘.

‘Material You’ comes with a totally redesigned notification shade and quick settings tiles. The notifications on the Android 12 now have rounded corners and features a more prominent app icon, an option to snooze for each app notification.

The quick settings tiles have been redesigned into a two-role layout, with much bigger settings icons. It also features new settings options (the new kill switch toggle for camera and mic, Home control, and Google Pay) – we will take more about that in ‘Privacy‘.

The lock screen was also redesigned. It’ll now show you the weather details and this huge clock when you have no notification displaying on your screen.

The highlight of this UI revamp is what Google calls ‘Color Extraction‘. How it works is; when you set a wallpaper, the Android 12 OS identifies the prominent and complementary colors, and then uses those colors to auto-theme different parts of the OS – apps, widgets, keypad, quick settings, volume rocker, etc.

Google has also made a lot of privacy-related changes on Android 12. First, let’s talk about the kill switch toggle for the camera and microphone:

Also, there’s a new privacy indicator that will display at the top-right corner of your screen when an app on your device is using the camera or the mic.

Furthermore, you can set up ‘approximate location permission‘ for apps that don’t need to know your exact location.

While Android smartphone manufacturers already have one-handed features built into their phones, Google is building it into stock Android.

In conclusion, it looks like these features are just the tip of the iceberg. Google says Android 12 will first launch on the Google Pixel this fall – we expect it to come with even more new features, and even more when it is featured on other brands.

EAT 07:14 am: New reports now indicate that we could see the release of stable Android 12 AOSP on October 4. This should also see Pixel devices bag this update.