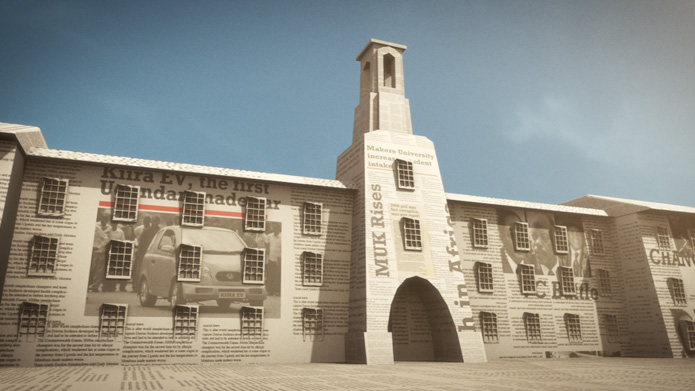 Addmaya is a Ugandan Film, TV and Design firm specializing in Brand Identity, Promos, Commercials, Documentaries and Graphics Design across different media platforms. They have over the years built a strong portfolio of satisfied clients while pushing the boundaries in marketing communications and design. They recently celebrated their 5th year in business and we had an interview with them in which we uncovered an incredibly inspiring story of one of Uganda’s most successful startups. Here we show you 5 of their must watch commercials/Ads/Documentaries in the 5 years they have been around.

As a way to win back their customers from the ever growing mobile money craze, Bank Of Africa has introduced a mobile banking service that is equally convenient and arguably more efficient. To get it to the public, they needed to make a bold statement that they were stilll major players in the game and thus approached Addmaya to come up with something new and bold.
Addmaya ended up helping them create an extremely wacky and probably the most dynamic (half phone half wallet) 2D character mascot that the Ugandan market has ever seen. The Ad features our wacky character going through the drills of trying to explain all the different features of the service…one of which is the ability to carry out ATM cardless withdrawals. Now how cool is that…

We were approached by PACE to tell the story of ProFam’s social enterprising model and how it has made contraceptives affordable and accessible to low income families.
The story traces the roots of large families in early Uganda and the challenges women faced raising children on tight budgets. It highlights the impact of ProFam’s clinic-network model on families and communities and how its shaping the development of Uganda. The story was submitted as part of the PSI annual convention competition in Washington, DC; where over 58 countries submitted stories highlighting the impact of their work.
The ProFam story emerged best, walking away with Gold and marking Addmaya’s first major recognition.
Credits: Concept, Character design, 2D Animation, Matte painting, Compositing: Addmaya Motion Pictures
Voice: First Love Studios

The Church is a project that was led by James and Stephanie Skinner of Fakeleft and Solange Nolan, the International Marketing Director at Watoto . In the early days of brainstorming, we knew that this was by far one of the most challenging yet exciting projects. With less than two months to the Watoto Cape Town launch and a storyboard that required shooting in over 20 different locations across Uganda and in South Africa, we so set ourselves up for a roller coaster ride.
The whole project was shot and edited in 2K by a team of five people and we had a sound engineer Allan Waswa come in to compose the score and edit the sound. Traveling to Cape Town, South Africa with the photographer James Sekajja, was the highlight for us.
The brief the team had was to produce a short 3min video and an extended 8min version that defined the church as God intended it.

To see more of their work visit their Vimeo Channel