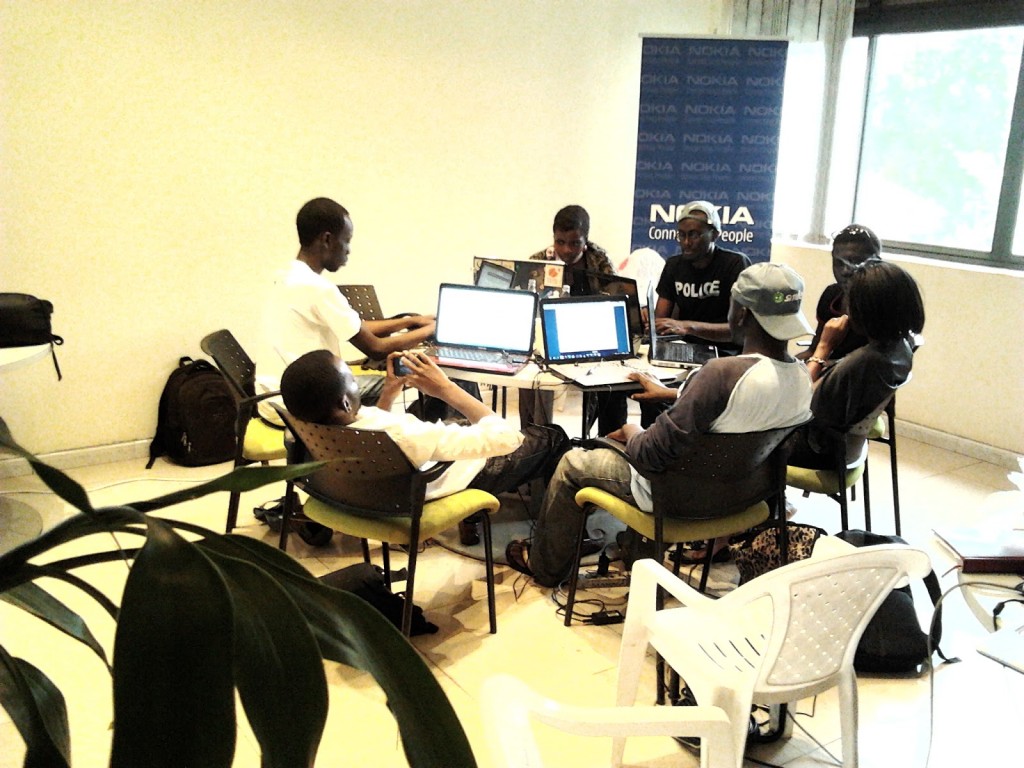 Uganda loses $177m per year due to poor sanitation according to the Independent magazine and this is one of the reason why an army of Tech developers, Tech enthusiasts, corperations and a government authority have braced themselves for a 48 hour hackathon here at Smile Communications HQ at Bukoto. Follow the event on twitter using the hashtags #SanHack and #SanHackKla.

The event is organized by Mara launchpad and Hivecolab with Smile Communication and Nokia being the Sponsors in partnership and the World bank. On Sunday, teams will pitch their ideas to a panel of judges and stakeholders in the sanitation sector. The winners will implement their projects with key stakeholders while the other teams’ projects will continue to be developed under the hive collab lab program by hivecolab.

I’ve already interacted with various teams on the site and the ideas and apps coming out of this hackathon will astonish you. The goal of solutions emerging out of this hackathon is one — improving sanitation in the community thereby improving health standards and hence the quality of life. Here’re some the solutions flying around the innovation camp;

This robot detects whether or not you washed your hands and alerts you through pre-recorded robotic voices. The prototype consists of an Arduino micro-controller board, two smartphones whose cameras are used as sensors and and android app.

One of the devices monitors the entrance to the toilet (sensor A) and another monitors the hand washing point(sensor B). Sensor A then notes when someone enters the toilet and when they’re about to leave, and it’s at this point that sensor A alerts sensor B to expect that someone to wash their hands. If sensor B doesn’t detect anyone washing hands in a time span of about 15 seconds, then the system assumes user forgot or is forgetting to wash their hands and it’s at this point that the voice message is played.

This is (surprise, surprise) a game that encourages or teaches the user to be more responsible in keeping the community they live in clean. It’s a unique and interesting approach to sanitisation through the concept of gamification.

The games helps someone sanitize their environment. The user chooses their environment/category (personal, regional, community,national) and depending on their score, they are given a task related to the category. If you for example choose community, then the app has a Truck that moves around the street and your job is to put the rubbish into the truck. The more rubbish you manage to load onto the track, the more points you earn.

This is a toilet manager that works for both private and public toilets. The app enable users to anonymously report the state of toilets to a central authority in the hope that an appropriate action is taken.

Users report the status of the toilet (clean, dirty, very dirty) by scanning the QR code of the respective toilet statuses and the app automatically sends the information to a central management system. The authorities responsible then respond accordingly.

This android app enables users to verify the genuineness of sanitary products such as baby diapers and sanitary pads.

Product manufacturers embed authentic bar codes in their products. Users before buying the products scan the product bar code using the app and this is bar code verified against the manufacturer’s database to confirm the genuineness of the product.

It’s a sanitation reporting system that empowers users to report sanitation issues they’ve noticed in their community to the concerned authorities (KCCA, NEMA and NWSC).

Using the SMS front-end, once a user for instance notices a broken water pipe in their community, they can simply send an SMS text to a predefined toll free short code. This information is then aggregated by the system and forwarded to the concerned authorities for further action.

Commodity line of site infrared sensors are attached to the latrine, urinal and hand wash areas. These sensors feed data to an Arduino microcontroller, which sends this data via a GPRS unit to a central system. These sensors allow us to calculate how many people visited the toilets and how many are actually washing their hands. A separate web based application processes this data and shows graphs and alerts to concerned officials.

Sanileaks is a mobile and web app that enables yours expose unhygienic facilities in the community by enabling them rate how hygienic the facilities they visit are at the public places they visit.

When the user has the app installed, upon using a specific facility at whatever public place they’ve visited, they are able to tap a snap of the facility, rate it and upload the information to a publicly accessible web application where this information is aggregated and displayed to the public.

This system composed of an android and a USSD app makes garbage disposition by users and collection by the authorities more efficient thereby ensuring a clean environment.

When the user wants to dispose off some garbage and the nearest bin is full, they can simply report this information to the concerned authorities who should (hopefully) come and empty the bin. In the meantime, the system will recommend the nearest bin where the user can dump the garbage.

[interlude] What’s and why a Hackathon

While having a super break, I caught with two developers, Fixx and Younghusband, the guys behind the hygienotronic system. I wanted to understand exactly what a hackathon is and why these 48 hours hyper-active tense sessions were held.  According to Fixx, a hackathon is a gathering of computer programmers who come together to collaboratively code in an extreme manner over a short period of time (usually over the weekend). The sessions are usually held to come up with specific practical technological solutions to particular problems. For instance this specific hackathon is addressing a growing concern of poor sanitation in our communities that needs to urgently be fixed.

According to Fixx, the “hack” in the “hackathon” implies that conventional software development techniques are usually not followed as solutions are required with in a short period of time.

Because companies or organisations have tight budgets and rarely care about Research and Development(R&D), hackathons are actually an opportunity for businesses to reap from the intensive and practical R&D that happens in these hackathons. Already officials from Kampala City Council Authority (KCCA) are here to scout out some the solutions developed by the teams that could enable the authority improve Sanitation in the city through an improved and efficient garbage collection.

The pitching is happening tomorrow Sunday at about 4:30 Pm and TechPost will update this blog with the winners……..

The challenges of innovating in the local Tech Space

Again while having lunch together, I caught with Nelson Kabanda, a GIS specialist and programmer and Bwrire Ancel who are part of the team developing TrashMaster in a rather casual and informal discussion which among other things entailed their personal experiences in innovating solutions for the local market.

Technically,  Nelson highlighted the challenge of choosing a specific platform on which a particular solutions will run. For instance for a garbage disposition and collection monitoring system, one would initially almost immediately go for a web based platform which has the advantage that it is accessible anywhere from any internet connected device. But it won’t be long when the developer realizes that internet access is not ubiquitous. While contemplating about that, the developer also knows very well that mobile technology supersedes computer or web technology in terms of reach and usage.
But deploying a mobile solution is far more complicated than you think. Should you go SMS, you’ve to hassle with either the local Telecoms or Uganda Communication Commission(UCC) for a short code which is about $2500/year and this is not pocket change for a developer trying to get a hazy idea on ground.
Should you decide to develop a native mobile application, you would think that you’ve to choose between Nokia’s Symbian, Android or iOS, right? It’s not that easy. With the proliferation of counterfeit devices in the mass market whose “operating systems” don’t conform to any known international standards, it’s almost impossible to roll out a solution that works across these devices.

But it’s not just technical challenges that local innovators here face. It’s also political. According to Nelson who has developed about 10 different solutions and has tried to pitch some of his solutions to some organizations, he has faced the challenge of these organizations adapting his solutions. While most organisations have IT departments, some of them do have the capacity to come up in-house solutions to specific problems that the organization might be facing. The logical step would be to outsource the development to a competent solutions company or developer in our case. But for one reason or another, organisation don’t do that!

The other challenge is the over consumerisation of western technologies by local users even in the presence of an alternative local solution.  There’s a stereotype or misconception among users that local innovations are somehow inferior to their western counterparts and it’s because of this that many local innovations have stalled in the innovator’s labs for along time.

Perhaps this  is beginning to change as indicated in this hackathon. For instance we’ve seen some key stakeholders in the sanitasion sector like KCCA, New Vision express interest in some of the innovation that are brewing in the hackathon.

The presentations are on

The innovators are right now presenting their solutions to a panel of judges and members of the public. We’ve seen great presentation from the guys doing Toilet-Trac and an on-stage demo by the Aba Toii team while the Hygienotronics guys presented a video of the system in action.

And the winners are……

It’s been an absolutely remarkable 48 hours non-stop event of intense R&D here at the sanitation Hackathon at the Smile HQ. The official from the world bank has remarked that while the innovations developed at the hackathon are amazing, they’re mainly geared toward the urban dwellers and yet the majority of Ugandans (70%) live in the rural areas where toilet or latrines are discrete. Hence he urged developers to consider that demographic. He also noted that more marketing of these innovations need to be done.
Mark Pritchard, the marketing manager of Smile noted that African problems can be solved by African innovators who have a lot of potential. Smile Telecom is empowering people through it’s super fast 4G/LTE network that’s starting to roll out across the country.
We as the the TechPost are thrilled by local innovations. We’ve been really impressed by how much talent oozes out of this innovation camps. We personally liked the Hygienotronic and Toilet-trac systems that used embedded systems (a combination of software and hardware solutions) — something that’s unique and not easily developed. We also liked the sanitize game which approaches sanitation through education and fun.