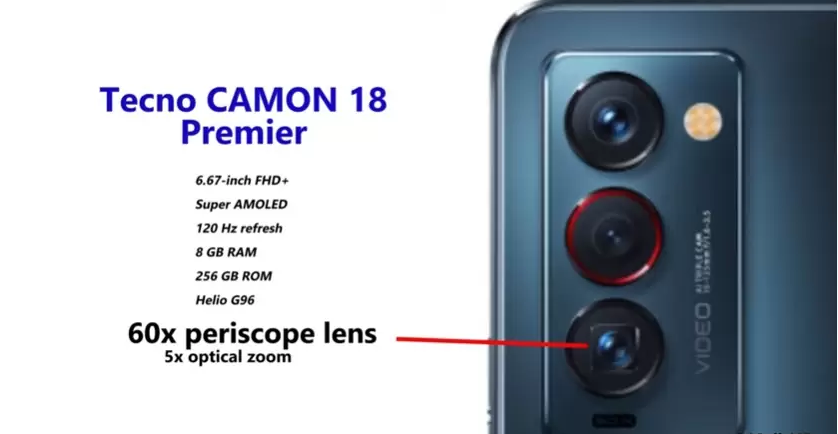 The Tecno Camon 18 series is on the brink of making its debut on the heels of the Phantom X that was recently released. Also carrying some solid specs with the new MediaTek Helio G96 processor to boot and camera-centric features for mobile photography enthusiasts. Speaking of cameras, the Tecno Camon 18 series is set to launch with a 60X zoom which might be reserved for the Premier or Pro model as seen with the Infinix Zero X series. This 60X hybrid zoom is a similar feature seen on the Infinix Zero X Pro tagged the Moon Capture feature.

Furthermore, leaked images have shown a smooth glass back with a slight camera bump housing three rear cameras. The camera module is somewhat reminiscent of the Camon 17 series that came before it. This will be an interesting release fo Tecno Camon fans considering this is poised to be the best Camon camera phone yet.

From the images we’ve been seeing, the display is definitely a big one something in the 6.6+ inch range. Much still remains to be known beyond this, although more details will be released as the launch date draws near which is to be around early October.

Going by the track record of the Camon series, you can expect decent mid-range specs from the Tecno Camon 18 series. Although not quite up to the level of the Phantom X, the Camon 18 series should come at a more affordable price.

The available colour options we have seen so far dark tone green colour and a silvery finish model. We will keep updating this post as more information about the smartphone begins to unfold.

In addition, the camera will be powered by Tecno’s TAIVOS technology which uses artificial intelligence to improve your pictures. We will keep you updated as more details appear.

Further images shows that the Tecno Camon 18 Series will have a punch hole central camera with slim bezels surrounding the screen.

The full details of the Tecno Camon 18 Premier has appeared and you can check it out here.

2 thoughts on “Tecno Camon 18 Series: All You Need To Know”