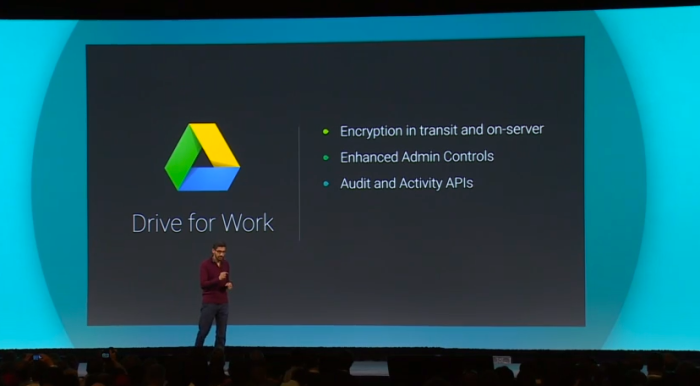 Having recently released independent apps for “Docs” and “Sheets”, Google has announced that it will releasing slides for Android too. This announcement was made at Yesterday’s Google I/O where Google touted its new tweaks to Google Drive. Google also announced “Drive for Work” a service where it will be offering unlimited storage for just $10 a month per user.

Google Drive now boasts of 190 million 30 day active users not even registered but active. Google has also integrated Quick Office and Drive. Quick Office is now built into Docs and Sheets which means you can now natively edit Microsoft Office files from any app. With this feature, you no longer need to worry about converting files or which app you are using to edit. When you edit with Quick Office and save, it automatically converts the file to the Google Docs format meaning you can continue to edit the document later in docs without the need to convert or save.

Google has also added a new “suggested edits” feature, that lets lots of people edit a document at the same time with the ability to track who did what. This is basically making Google  Docs more intuitive. What’s important to note here is that Google is actively eating into what was dominantly Microsoft territory and actually making it better. There is absolutely no reason why Microsoft didn’t think about collaboration in Microsoft Office earlier. Even though its now possible to do so as we speak not to mention that there’s now a dedicated Microsoft Office App for Android and iOS, once again, Microsoft may be late to its own party

To put icing on the cake, Google announced a cool enterprise feature giving companies access to unlimited storage for only $10 a month per person. Further, Google wanted everyone to know that 67 of the top 100 start ups, 58% of the Fortune 500 companies and 72 of the top 100 universities have gone Google. This means that they use Google Infrastructure and Apps like Drive in this particular case. Google Drive is one of those apps I have to use everyday and I am suing right now to write this post. I would say its one of those products that Google has very carefully thought about.