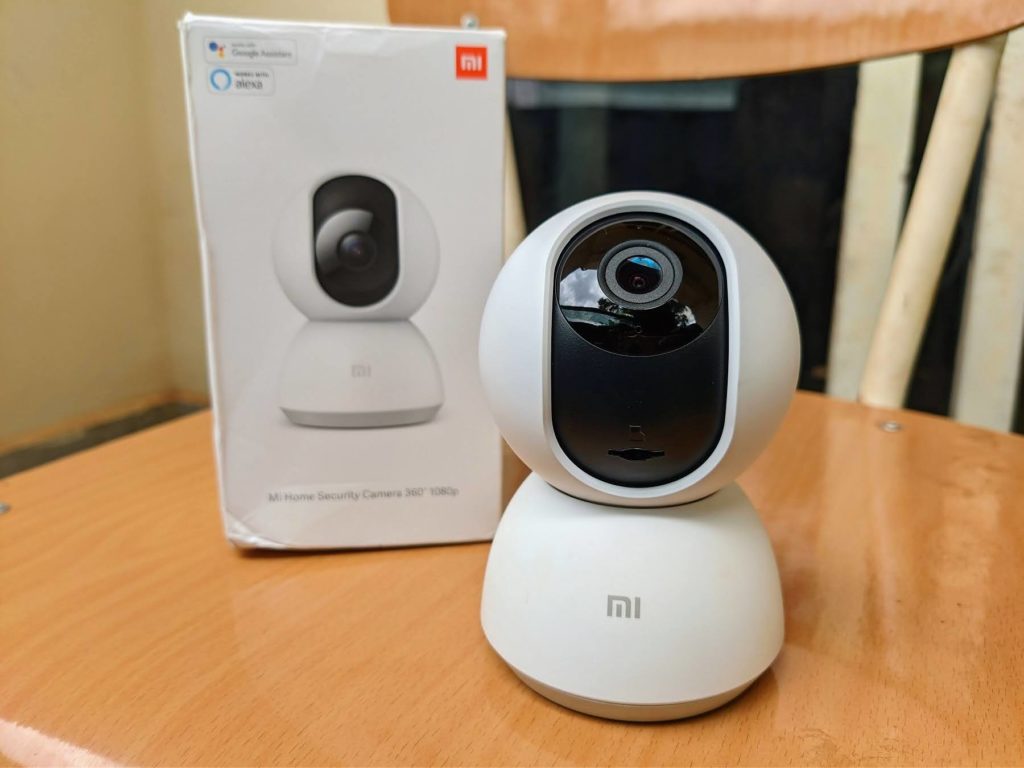 The Mi Home Security Camera 360 1080P is one of Xiaomi’s most popular security cameras in their inexhaustible roster of gizmos. At a going rate of $49.99, Xiaomi is a high value proposition at a fraction of the cost of the more established brands.

What you get is an eye in the sky capable of 360 degree surveillance at 1080P Full HD, motion detection and last but not least, crisp infrared night vision.

A user can pan and tilt the camera using the smarpthone app to capture everything in sight or reposition it for that perfect angle. For iron clad surveillance on the cheap, you can set notifications for motion detection.

The Mi Home Security Camera 360 1080P has a design that reminds me of an egg in an egg holder. A black camera eye and black eyeball are encased in a white exterior which is mounted on a dock that rotatoes 360 degrees horizontally. The camera eye for its part rotates 96 degrees in a vertical tilt which reveals the hidden Micro SD card slot.

The back of the camera head is pockmarked with holes for the loudspeakers. The sound is quite decent. The mic is positioned front next to the lens along with the indicator light.

The reset button and Micro USB charging port are located at the bottom. Four rubber feet make up the base in case you intend to place the camera upright. The texture maintains a firm grip on any flat surface.

Xiaomi was thoughtful enough to include a base unit and two screws for wall mounting. A sliding mechanism allows for easy installation and dismounting of the camera in one fluid motion. The dual motor head is quiet and allows incognito rotation. Rotation is achieved by swiping the live feed in the Xiaomi Home app. Kudos to Xiaomi for maintaining a smooth almost silent rotation.

My one gripe with the design is the material used. The hard plastic can withstand a fall or two, but I am not entirely convinced of its quality. The slit that joins the camera head leaves quite a gap which points to a delicate build.

The Xiaomi Mi Home Security Camera 360 1080P lives up to its rather long name. The recorded footage is clear both day and night. You can further improve the image quality by turning on lens distortion correction and Wide Dynamic Range mode (WDR) in the settings. WDR enhances the clarity of the underexposed and the overexposed parts of your image for a better outcome although it won’t work in Night Vision mode.

There’s provision for full color video at night if there’s decent ambient light. But in truth, it’s not as practical especially because we switch off the lights before bedtime, which immediately reverts to black and night.

Xiaomi has incorporated better video encoding technology which translates into less bandwidth and a smaller storage footprint without compromising quality. We put this to the test and recorded a 10 minute video onto phone storage at 1080P which took up only 69.64MB

The Mi Home Security Camera 360 1080P also supports integration with Alexa and Google Assistant and it has a ton of features some of which we are going to touch on momentarily.

The companion app of any device can enhance or destroy a user’s experience. On that front, the Xiaomi Home app (or Mi Home app on Xiaomi devices) does a remarkable job of making the Mi Home Security Camera 360 1080P an attractive purchase.

The Xiaomi Home app or Mi Home app prides itself on its simplicity. It’s a no-frills app that gets right to business. Opening the app displays your camera. A single tap starts your live feed. You can pan and tilt the camera by swiping on the live feed, watch 10-second home surveillance clips and also playback if you already have an SD card installed.

The camera displays a timestamp on the top left. A single tap on the feed will pull up options to turn off camera, toggle sound, adjust video quality and full screen mode. The Xiaomi Home app has prominent buttons for two-way audio, taking a picture, recording video and activating the D-Pad.

The Mi Home Security Camera 360 1080P has quite a lot going for it. Personally, it’s the fact that I don’t have to keep hemorrhaging money on subscription fees for cloud storage. After all, I am not made of money. The camera has an SD card slot that supports up to 32GB according to the Mi website. But more than that, you can save clips and even longer video on your smartphone with the Mi Home app.

Other than that, the camera can pan 360 degrees and tilt 96 degrees to cover all the bases. Xiaomi also tosses in Infra Red night vision, motion detection and a talk back feature. And the video quality is better than you’d expect. It’s a boon that you get a base and screws to mount the camera as a permanent fixture.

But like so many home security cameras, the Mi Home Security Camera 360 1080P has an Achille’s heel; it’s mains-powered. This is no biggie in regions that don’t experience power blackouts, but where I live, that’s when the thieves start prowling and testing defenses. It pays to connect the camera and WiFi to an uninterruptible source of power.

Secondly, the 2 meter Micro USB cable limits where you can mount the camera. This can be remedied by purchasing a male-to-female USB extension cable separately.

And one more thing; I initially thought it was just me, but it appears that lots of people have had a tough time adding the device using the QR code. It’s a hit and miss for the most part, although I found that ample sunlight helps.