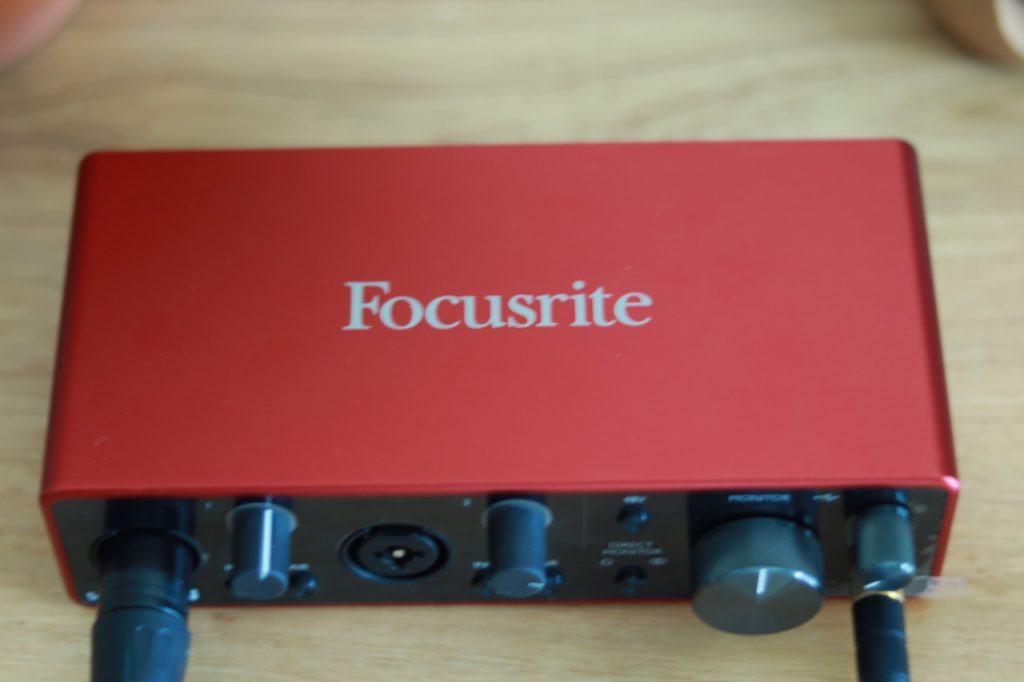 When I started creating podcasts and YouTube tutorials, I really didn’t know where to start. There was a lot of advice online, but the more I read and watched a number of YouTube videos, the more confused I became. There’s a lot of gear out there, but settling on something that met my needs within my budget range was such a challenge until someone recommended a Focusrite Scarlett 2i2 3rd Gen.

The Focusrite Scarlett 2i2 3rd Gen is an audio interface. If you’re not familiar with the game, you obviously must be wondering what an audio interface is. Well, an audio interface takes audio signals from a standard microphone or musical instruments such as a guitar and converts them to something your computer can process with software like Audacity or Garage band.

If an audio interface takes microphone input and converts it to a format that your computer understands, then how is it different from saying Lapel Microphone or USB microphone? Well, that’s a good question because I use both lapel microphones and USB microphones for my voiceovers, YouTube tutorials, and Zoom calls.

In terms of function, an audio interface like the Focusrite Scarlett 2i2 3rd Gen and a USB microphone such as the Blue Yeti or Fifine K669B which we reviewed do the same thing. They differ in how to achieve the function of getting input audio signals from a microphone to your computer.

A USB Microphone such as the Blue Yeti is a self-contained system. It’s a microphone with a cable that plugs into your computer’s USB port usually without the need for extra drivers. It’s designed to be simple to use and set up typically in a plug-and-play fashion. The USB microphone is also usually powered by the computer’s USB power, so no external power source is required.

The Focusrite Scarlett 2i2 3rd Gen is the third iteration of this audio interface from Focusrite. I have used it perfectly well on both Mac and Windows platforms. It now features a USB-C port for connecting to the computer while the previous model had a bigger USB Type B port. Having a USB-C port is definitely a welcome upgrade since this connector is now becoming the universal standard for powering most electronics. The USB-C interface is used for both data transfer and powering the audio interface. The Focusrite Scarlett 2i2 doesn’t need an additional power source, since it’s powered by the USB port of your computer.

The USB logo LED will illuminate when the unit receives USB power from your computer. That’s great because you don’t need yet another power plug. However, Focusrite recommends that when using it with a laptop, the laptop should be powered using its AC adaptor, as otherwise, the battery will run down faster than when powering the laptop alone.

Each audio input has a gain knob which enables you to dial in the sensitivity level that you want for the microphone or musical instrument. You also have a 48V phantom power knob which is necessary for most XLR microphones to function. If phantom power is on, you’ll see a red LED light come through the 48V label.

The Focusrite Scarlett 2i2 also includes a direct monitor. This allows you to plug in standard wired headphones through a 3.5mm headphone jack input. The monitor has a volume dial so you can control how loud you can hear yourself while recording in mono or stereo. On the front panel, you can set the monitor to either Mono represented by one circle, or Stereo represented by two circles. In Mono mode, Inputs 1 and 2 are routed equally to the two outputs (both the rear panel outputs and headphones) so that they both appear in the center of the stereo image. This is most likely the mode you will want to use for common cases. In Stereo mode, however, Input 1 is routed to the left output channel and Input 2 to the right. This mode is best used for recording something that is inherently stereo in nature.

On the rear panel of the Focusrite Scarlett 2i2 are two Line outputs which are 3-pole (TRS) ¼” (6.35 mm) jack sockets marked Left and Right. You can use these ¼” jack outputs to connect monitoring speakers. You can connect to either active speakers — that is those with internal amplifiers and volume control or passive speakers through an amplifier.

The Focusrite Scarlett 2i2 3rd Gen is available on Amazon for $179.99 or from B&H for the same price. If you want the Focusrite along with a condenser microphone and headphones, then you can get this kit for $239.99 which is still a good deal on Amazon. You can also buy it from Focusrite website itself for $209.99.