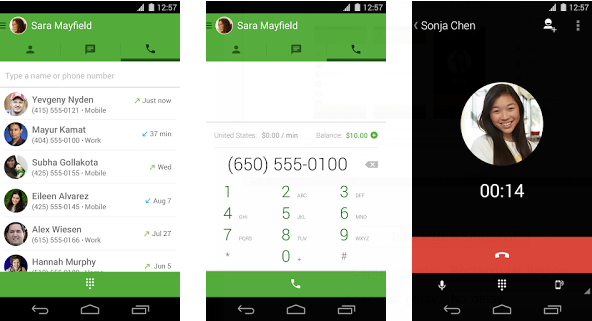 Google yesterday finally brought free voice calls to its Google Hangouts product. The announcement that was made on the Search Engine’s official blog will enable users with the Hangouts App on Android, iOS and the web make free calls to each other, numbers in the U.S. and Canada;

“Starting today you can make voice calls from Hangouts on Android, iOS and the web. It’s free to call other Hangouts users, it’s free to call numbers in the U.S. and Canada, and the international rates are really low. So keeping in touch is easier and more affordable than ever.”

The company has been offering free text chat and group video chats, but yesterday’s announcement will add voice calling to the plate.

How to get it

According to Google, to get started on Android, you need to download the new version of Hangouts v2.3 that will be rolling out over the next few days, then install the accompanying dialer to turn on voice calls. On iOS and the web, voice calls will be available the next time you open the app.

Should you ditch your voice plan? No

No. If you live in Uganda, you will still need to make the conventional calls through your network’s voice plans. Hangouts will only allow you to make free voice calls to other hangouts users only with smartphones. This of course isn’t everyone in your contact book, is it? Secondly, like Skype or Viber, hangouts uses your data plan to make calls to other users much like how Whatsapp sends text messages using your data plan.

One thought on “Google introduces Free Voice calls on Hangouts, but you might still want to keep your Network’s Voice plan”