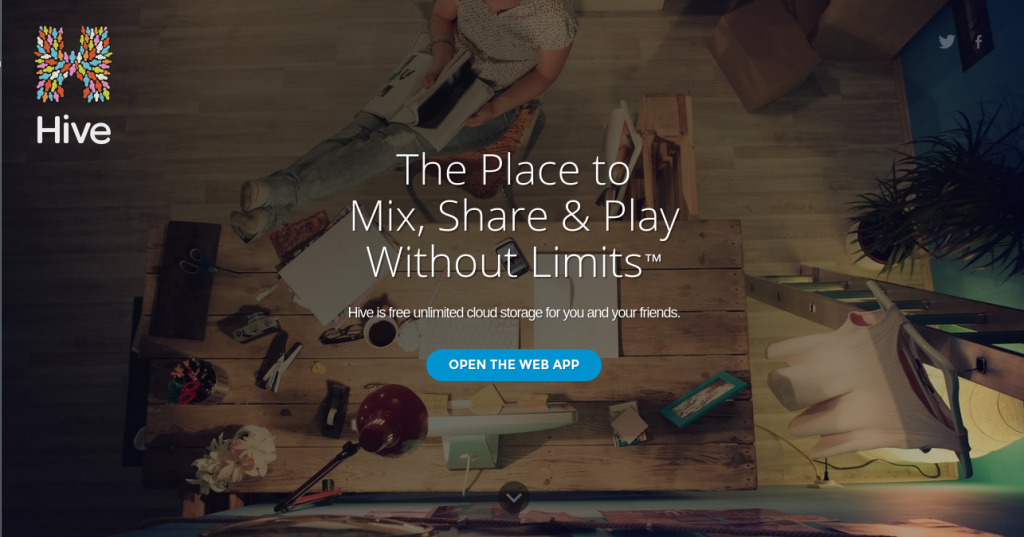 Storing your files up in the clouds where “no moths or thief can steal” has been around for a while. Dropbox, the simple and intuitive cloud storage provider popularized the idea of your files going wherever you go on whatever device you have. But, until now, there’s been one problem — you only had limited storage after which you had to delete some files.

But those shackles are now gone, thanks to Hive, which launched October 13 this year. The company is making a bold promise of offering not only free, but unlimited file storage to its users on its cloud. All you need is email account or have an account with existing social networks to signup. This means you can keep all your photos, music, movies, your cat videos, important documents for free.

Unlike other cloud storage providers though, Hive doesn’t offer syncing. Hence other people can’t delete things from ‘shared folders’ — they can only download — at least for now. Also the provider doesn’t have mobile apps for iOS and Android devices yet, but they should be on their way anytime soon.

So what’s the catch for this too-good-to-be-true service? Well, the company hopes to remain sustainable through the most common business model on the internet — Ads. Am not quite sure how users will like having intrusive Ads alongside their important files, but we shall see. However, the company has also foreseen this likelihood that some users might not be impressed with the Ad model and is also offering premium accounts. With these, you won’t see Ads for at least $9 per months.

Cloud storage wars never seem to end. Two months ago, responding to competition from the likes of Amazon and Google, Dropbox announced a storage plan for individuals called Dropbox Pro, that costs only $9.99 a month for 1 Terabyte of storage. In comparison to other cloud storage players, Dropbox has leveled up to Google’s $9.99/month for 1 TB on Google Drive product while Microsoft with OneDrive had been  running a promotion for 1TB for $2.50 a month. Amazon on the other hand is still a little slack with 1TB of storage on its Cloud Drive for $41.67 a month.

But can still beat Free, unlimited storage? Let us know in the comments