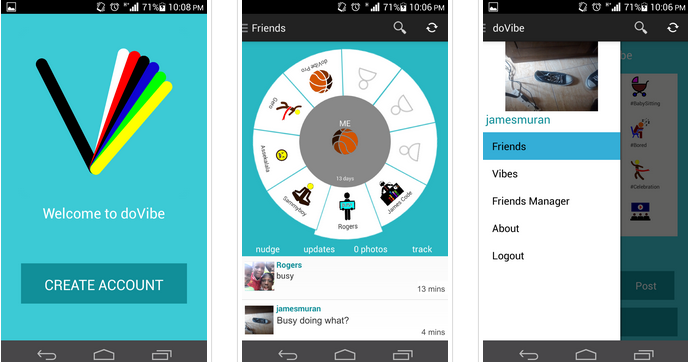 Dovibe, a social networking app that is specifically designed and built for the mobile platform has hit the mobile App stores. The App aims to bring mobile users closer to their family and friends with just a touch of a button.

The Mobile app is developed by Vibe labs Uganda, a Ugandan startup founded by two brothers,  Zimula Rogers a former Makerere student (co-founder and CEO) and Wagaba Mike (co-founder) who is currently doing a bachelors degree in Business Statitics with some help from CodeSync.

According to Mike, their target audience is anyone above the age of 13 years with a focus on Uganda. So, the innovators are directly competing with similar social networks targeting the same demographic which includes the likes of Facebook, Twitter, Instagram among others. However, the developers have chosen to adopt a mobile-only approach when choosing the appropriate platform for their product. When I quizzed Mike why they chose this direction, he told me over email that it’s because of the shift to mobile application from traditional desktop Apps and the fact that some features are adopted for the mobile;

“We chose mobile app because there is a general technological shift from the traditional website networking to mobile applications. People these days use apps more than they visit websites. The other reason as to why we are not having a website version is because the app concept can’t be integrated to fit into a website because of its features like the the “Dial”.

The developers drew inspiration for their App based on Kampala’s night life — the need to know what your friends are up to according to Mike;

“The idea was inspired by obviously the Kampala night life, the desire to know where your friends are led to birth of the first version of Dovibe”

The folks at Vibe Labs seem to be pretty confident of the direction and strategy that they have taken. They believe that their app will help create better social interactions among users by “reducing the clutter of information” that’s become the norm of today’s social media. The App is available on Android platform.