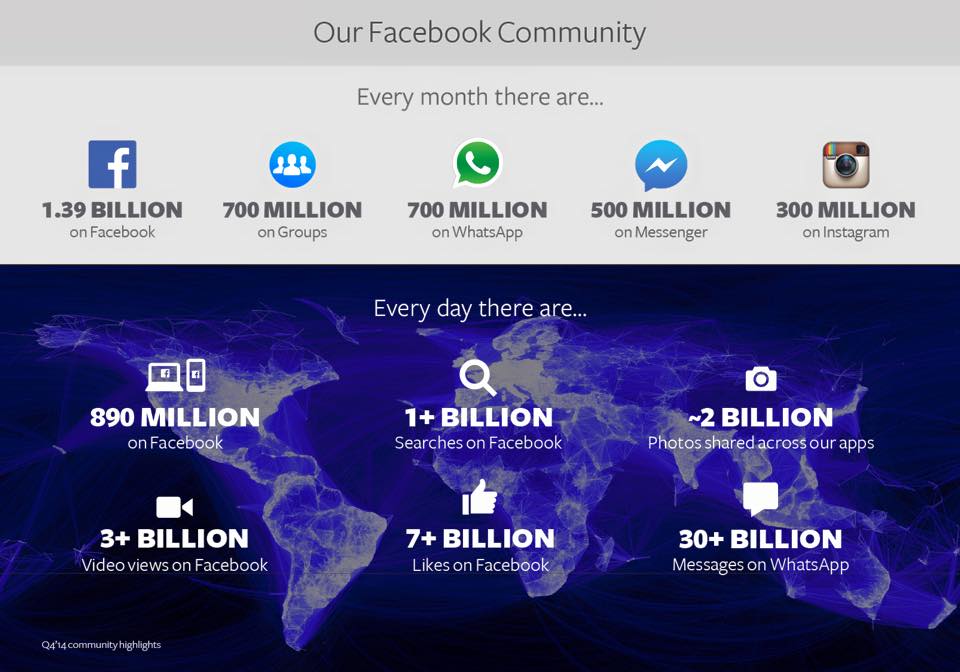 Facebook is once again high on its heels with mind-boggling stats that represent its startling growth rate. The Facebook empire seems to have just started on its mission to make the world more open and connected.

Here’s a summary of its stats from its latest quarterly earning report.

Every month, there are;

Now let me first let you gasp some air…done? Okay.

Video on Facebook has gained unprecedented traction lately as you can see. 3 Billion Video views on Facebook isn’t far from Youtube’s 4 Billion video views per day and 1 hour of video uploads per second. So Google is the king of Video consumption, but maybe not too long.

Another mind-blowing statistic here is 30+ Billion messages are exchaged on Whatsapp per day. That’s 900 Billion per month. Now compare that to 350 billion text messages, the number of SMS Messages exchanged across the world’s mobile networks every month.

Meanwhile Facebook’s recent moves show that it’s pushing towards 2 Billion users mark. The company this week released Facebook Lite, a light-weight version of the Facebook App designed for low-end smartphones and slower networks — that’s clearly targeted towards emerging Markets. Facebook has been pushing its Internet.org program whose mission is to connect more people in emerging markets online by providing them with Free basic online services. Internet.org App last week launched in Ghana and is rumored be launching in Uganda in less than 3 months from now.