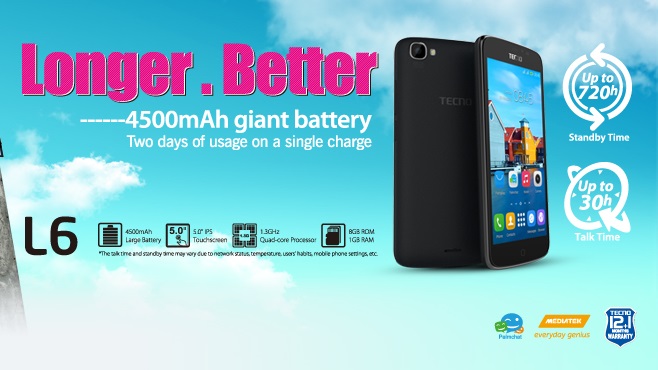 The Tecno L6 was released in January of 2015 and it seems to be Tecno’s answer to all those who are complaining about battery life. The phone comes with a gigantic 4500 mAh battery which from comparisons with various smartphones on the market is one of the biggest we have seen. Let’s make a quick comparison of some of the top phones and see how big their batteries are. The Huawei Ascend Mate2 has a 3900 mAh battery, while the OnePlus One and Sony Xperia Z3 both have 3100 mAh. The iPhone 6 Plus has 2915 mAh and Samsung Galaxy S5 has 2800 mAh.

Even though battery life is not just about how many mAh your battery has but also actual performance under heavy use, it’s generally safe to say that the more the mAh, the more power/ battery life your smartphone has. We have not yet tested the L6 to see if it’s battery is worth the hype but for now, cramming 4500 mAh seems impressive. Battery aside, let us look at the Tecno L6 Specs.

The Tecno L6 is available in Uganda and goes for about Ugx 700,000 (actual price is yet to be confirmed). The phone can be purchased at any of the Tecno vendors around town, the Tecno head office at  Majestic Plaza or at Tecno store at Lugogo mall.

2 thoughts on “Meet the new Tecno L6, the 4500 mAh smartphone to solve your battery life issues”