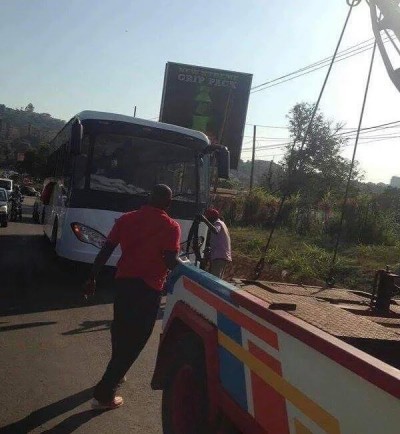 We recently gushed about the Kayoola Bus, Uganda’s pride and joy, the solar-powered electric hybrid  that put Uganda on the map for innovation and technological advancement. Developed by Kiira Motors, the much anticipated 35 seater bus was commissioned by President Museveni of Uganda at a grand ceremony at Serena Hotel Kampala

In an unexpected turn of events, what was supposed to be a triumphant launch of the Kayoola bus presided over by the president ended up being a disappointing trip back to the garage aided by breakdown tow-trucks.

According to The Insider, Emma Were from the Uganda Media Center of the Office of the President had this to say:

“It didn’t breakdown. It was towed to avoid jam,” Were said, rubbishing the rumour.

She added: “That was planned by the way.”

Were said by International standards, “they are not supposed to be driven. If you were at Namboole when they first brought it out, they did the same”.

We tried to wrap our minds around that statement from Government and all we got for our efforts was a migraine. Baffling that a bus slated for mass production is not ‘supposed to be driven’. And on top of that she claims that the breakdown was part of a genius master plan.

What we think is that the launch of the Kayoola Bus was rushed before rigorous tests could be carried out; double checked and triple checked for quality control just to be sure. The science behind the project appears to be sound and the bus shouldn’t have broken down as it did, but the problem seems to be the political motivation behind the rushed launch that will lead to more gaffes as opposed to technological advancement. Science should take its course. It takes countless tries to get inventions to work. Uganda shouldn’t have rushed the Kayoola project until it is mature enough to withstand public skepticism.