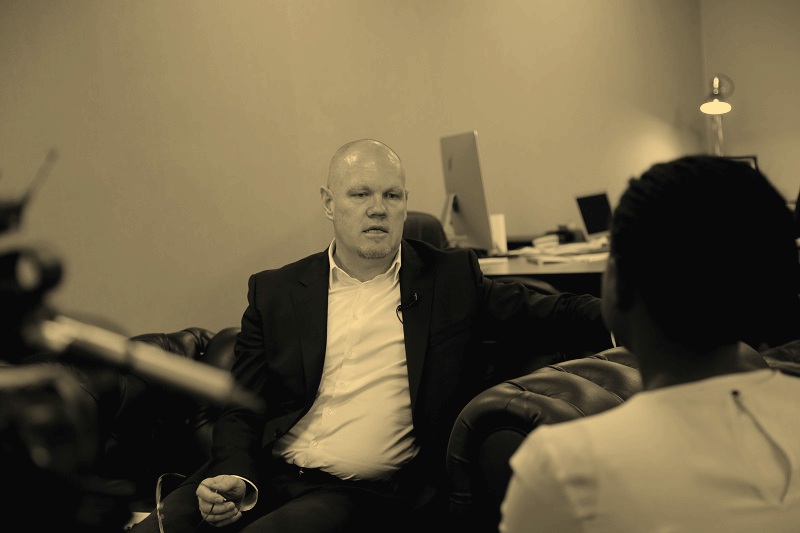 Brian Gouldie is MTN Uganda’s outgoing CEO. He came to Uganda 2 years ago to replace Mazen Mroue. I have been blogging actively since 2012 and as a tech blogger, the coming of a new CEO means a couple of things to us. We ask questions like what are they going to do differently? What will their leadership style be? What will they change or focus on? As such, we follow the lives of these CEOs at press events, product releases and any company events. We then tally this against the company’s achievements made in annual reports and other reports.

Brian wasn’t as much entertaining as Mazen who loved to have fun, a reason why many in the media loved him. For the time he was CEO, Brian was all about getting the job done. I would presume that he was a workaholic like many CEOs since I never saw or heard about him at any social event that wasn’t MTN related. In an interview with one of Uganda’s dailies, he mentioned that his fixed term contract and what was required of him left no time to even play golf.

The business casual CEO most of the time dressed in jackets and boots unlike his peers who are usually clad in ties all the time. In his tenure in Uganda, I observed a couple things that will always remind me of Brian Gouldie even after he leaves.

As a tech blogger, we had never been so busy. My inbox was always buzzing with invitations for product/service launches, press conferences and breakfasts, industry events and many others. I can safely say there was an MTN event every week and sometimes multiple events within the week. This gave us an opportunity to engage with MTN as a brand and with Brian as an Individual.

I wasn’t that close to him and apart from a couple of questions at the different events, we didn’t have much of a conversation. That aside, I had never seen a man so straightforward. He seemed to always know his stuff. He never ran away from any question however technical or complicated. He always had an answer for everyone.

Sometimes I would wonder how he managed to know everything about anything MTN. As CEO you would think he only knew about managerial and strategy questions but Brian would break down technology and show you that he is well conversant with all the tech MTN is using.  You know how sometimes a CEO is caught off guard and had to refer to one of his colleagues to answer a question? I never saw that happen with Brian. One would wonder when he got time to know and understand all that information.

When you look at his LinkedIn profile, it all begins to make sense that a man who joined MTN as a billing manager in 1992 has risen in the ranks to CEO. It definitely speaks volumes about his character and tenacity.

My biggest memory about Brian is how he handles crises. The first was an industry regulation crisis in which MTN and UCC weren’t on the same page. He had just arrived and probable hadn’t even settled in yet. At the time, customers were ranting about SPAM SMS, inaccurate and faulty billing, poor customer care among many others. At the time, UCC required MTN to harmonise the use of short dial codes and rectify a couple of regulatory issues while URA claimed MTN was evading taxes.

I had been following public relations and corporate communication in Uganda for a while but how MTN handled the crisis under the leadership of Brian marked a new dawn in which the customer was treated as a key stakeholder. Shortly after, was another row with the industry regulator on registration of MTN subscribers.

This row saw MTN Uganda losing about 3.7millin customers. What wasn’t captured much by the media was the innovations that MTN Uganda came up with to try and register as many people as they could before the deadline which was nothing short of amazing.

A visible Increase in brand presence and revenue

Having attended many of the press conferences and media engagements with MTN I noticed that when Brian came, MTN got a new focus on re-establishing themselves as “the LEADER” in everything they did. This meant online and offline campaigns and product innovations that positioned them as a leader in different product and service categories whether it was Voice, Data or Mobile Money.

Wherever you went, MTN was seen and heard regardless of where you were or what medium you were using. This seemed to have paid off according to an interview he did with the Red Pepper which stated that in his time as CEO, digital revenue grew by 20.6 percent, mobile data revenue grew by 76 percent and ICT revenue growth by19.3 percent. Mobile Financial Services revenue grew by 12.1 percent in the same period despite a decline in the subscriber base.

Innovative line of Products and Services

I wasn’t a big fan of MTN before, I believed that they exhibited the “Too big to fail attitude” that made them in a way “unbwogable” and as such they could treat customers anyway they wanted. The effect was non customer centric policies and decisions. Customers would complain to deaf ears but because some of them had used their mobile numbers for years, they couldn’t abandon them for other networks.

I was one of those people who had abandoned my MTN SIM cards. One of the reasons was that I was always on the lookout for who had the most affordable calls and stable network. So I moved from one network to another. MTN launched a portfolio of affordable products and services like Voice and Data bundles that saw me renew my MTN SIM card. In an interview, Brian is quoted saying;

“I think we have also managed to restore customer satisfaction levels back to the highest levels since March 2014. This has been achieved through the delivery of competitive propositions and increased agility of product delivery of competitive propositions. For example, the launch of voice bundles in November 2014 was critical to success. Voice bundles now constitute 45 percent of total revenue in a 13-month period since launch”

I would entirely agree that MTN Uganda customer satisfaction improved by leaps and bounds after Brian came.

For his 2 years in Uganda, I credit him for managing to get me back to using MTN which wouldn’t have happened if they had nothing valuable to offer. MTN Uganda still has a lot to achieve in Uganda and surely Brian Gouldie has together with his team helped set a firm foundation for MTN Uganda to flourish. I wish him the best wherever he may be going and I hope we have fun with the next CEO too.