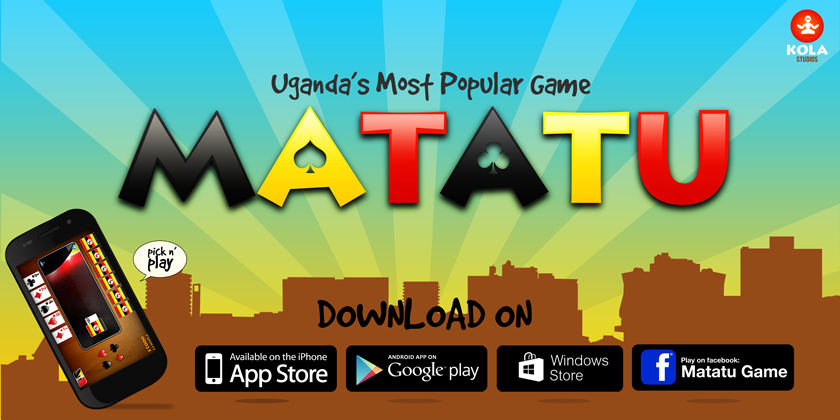 Matatu, an addictive card game brought to you by Ugandan developers Kola Studios has hit an enviable milestone, surpassing 200,000 downloads in the Google Play Store from 100,000 last year. What this means is that Matatu garnered an unstoppable 10,000 downloads per month on average for the past year. What is even more impressive is that 68% of the downloads originated from Uganda itself and Kenya at 14%, proving that Ugandans can indeed support their own apps if developed right.

Matatu is a two-player card game played the Ugandan way. The goal of the game is to play all the cards before your opponent, matching diamonds with diamonds and spades with spades, and so forth. The play can be changed by matching a King with a king or similar numbers, etc, regardless that it’s Kings of spades, hearts, etc, or a 9 of hearts or diamonds, etc. First to play all their cards wins. When an opponent plays, 2, you are added two extra cards.

Quotable: “It is very exciting to see the continued successful growth of Matatu,” states Daniel Okalany, CEO of Kola Studios. “It was only about a year ago that we surpassed 100,000 downloads and it’s a great accomplishment to see our audience double in such a short time.”

Why Matatu is so popular

Dignited interviewed Daniel Okalany, Kola Studios CEO back in 2014 when Matatu was already considered a Ugandan success story at a modest 60,000 downloads. Daniel talked about the  5 key areas that determine the success of any product which include the target audience, emotional attachment, business model, product and team development. Follow the link above to read the insightful advice Ugandan developers should follow if they are to make any leeway in App development.

Ugandan Apps with over 100,000 downloads

Only a handful of other Ugandan apps have surpassed the 100,000 milestone and a number of them are not actually developed locally. Dignited curated a comprehensive list of Ugandan Apps on the Google Play Store. Whereas Google gives an estimation of of the total downloads, it helps to gauge the popularity of your favorite apps. Here are some of the most popular: