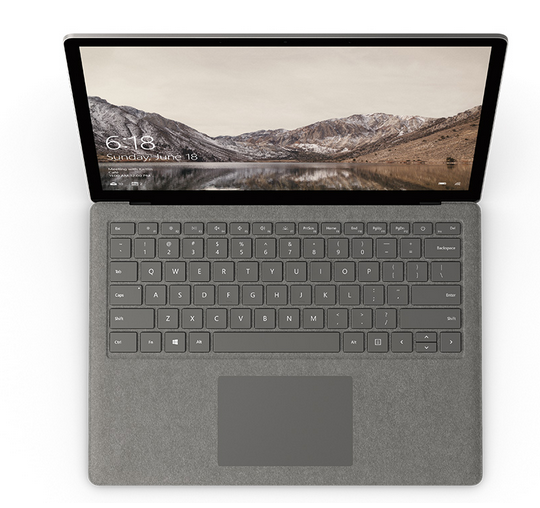 Microsoft had got us so used to Desktops, and campus students found better love in alternative brands when it came to a laptop choice. But the market is so wide, and lucrative at that; Microsoft finally has a laptop of its own. The Surface Laptop was unveiled during the MicrosoftEDU event, at which the new Windows 10S was also launched.

This release is a direct competition for Macbooks and Chromebooks that are popular on campus environment. It comes with a lighter body and longer lasting battery compared to the Macbook.

The Surface Laptop has a 13.5-inch PixelSense display with a 3:2 aspect ratio; with 3.4 million pixels. Microsoft says this is the thinnest LCD touch model ever created and put into a laptop. The screen also supports Surface Pen, enabling a user to draw on the display just like other Surface devices. Notably, there is a single USB 3 port, mini DisplayPort and no USB-C ports; a questionable point.

It is reported to carry an amazing processor on it. Running on Intel Core i5 and Core i7 with up to 16GB RAM and 512GB of SSD storage, it can last 14.5 hours of battery activity. This renders the Surface Laptop is faster than the i7 MacBook Pro, and makes its battery life more than any Macbook Air on the market today, as Microsoft claims.

Microsoft is using the device as a flagship for Windows 10S. The new Operating system is aimed at simplifying use for the low-end hardware, especially in the education market. It also cuts out any openness and closes down to a controllable system.

Windows 10 S computers will run only apps from Microsoft’s app store and any other software is closed out. This is a lesson Microsoft could be picking from the success of Apple’s App Store. Microsoft says that if Google is willing to list Chrome in the Store then it will be available on devices that run Windows 10 S. Without Chrome, Microsoft could focus on its Edge browser and in particular education sites and web apps.

Windows 10 S will also be free for all schools that are currently running Windows 10 Pro PCs, and include free Office 365 education with Microsoft Teams.

The Surface Laptop will come in four colors; platinum, burgundy, cobalt blue, and graphite gold. It is already on pre-order and will be available on June 15th starting at $999 for the Core i5 model.