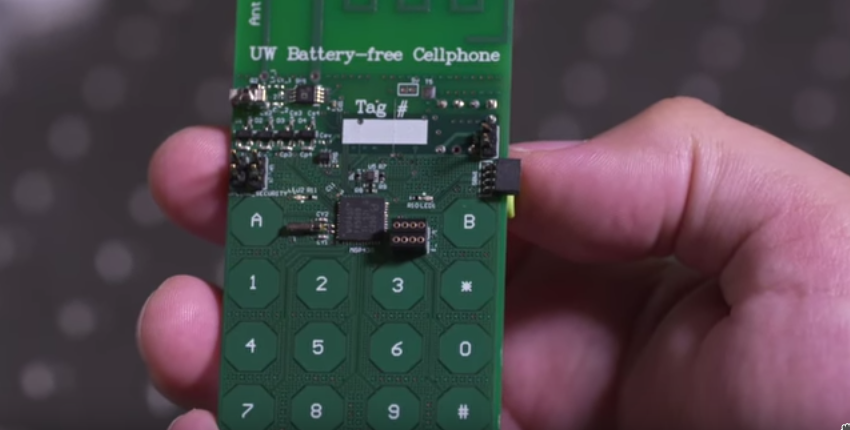 Smartphone vendors are currently on an arms-race to zap the most biggest specs into your smartphone each year while neglecting the most important part — the thing that powers your phone.  The best that we have come so far is creating batteries that at most give you an all-day charge. But what if you don’t need the battery at all?

Researchers at the University of Washington have invented a cellphone that requires no batteries at all to work.  The prototype built using commercial-off-the-shelf components on a printed circuit board harvests power from RF signals transmitted by a custom base station which in ordinary terms is a cellular tower or telecom mask about 10m away.  The researchers also get power from ambient light with tiny photodiodes embedded into the circuitry of the phone.

Researched demoed the first Skype call using a battery-free phone over a cellular network, via custom bridged base station. Their design can sense speech, actuate the earphones, and switch between uplink and downlink communications, all in real time.

The concept of using RF signals to power or charge smartphones has been around. RF energy is currently in abundance from radio transmitters around the world found in mobile telephones, handheld radios, mobile base stations, and television/ radio broadcast stations. This makes it an attractive source for powering your phone.

Related post: Wireless systems we one day won’t live without

Nikola Labs for instance developed an iPhone 6 $99 smartphone case that can charge your smartphone by harvesting ambient RF signals. This means that eventually, your smartphone might not come with any port whatsoever as charging and data transmission could all be done wirelessly.