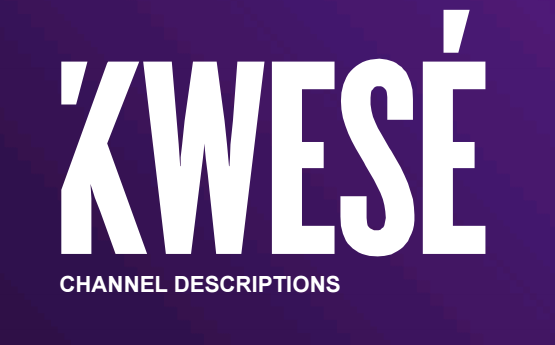 Kwesé TV, as you might already know, is taking firm strides on the Ugandan market; and only time can tell that it is destined for a top spot,  given the exclusive programming and affordable rates.

We’ve had an opportunity to experience the Kwese decoder, and the experience is just beginning. We now outline for you the full list of channels.

They are outlined in seven categories namely: Series and Movies, Factual and Lifestyle, Kids, Sport, News, Music, and Faith.

Kwesé has a rich series and movies line-up with a high number of own and exclusive channels. Its own channels provide strong vehicles for premium, exclusive programming, as does AMC. Millennial channel Viceland is exclusive to Kwesé, as is Passion, a telenovela channel custom-made for the African market. Bollywood, Nollywood, and escapist reality round out the category.

Kwesé has a particularly strong factual line-up, bearing out the commitment to play a constructive role in the market. Kwesé Inc., a channel devoted to enabling entrepreneurs, is key in this regard. Kwesé Know (mainstream factual entertainment), Odisseia (exclusive documentaries), and a set of Discovery-owned channels also feature.

Kwesé’s key strength is its own kids channel, as well as exclusive carriage of Dreamworks, famous for franchises like How to Train Your Dragon, Kung-Fu Panda, and favourites from the Turner stable: Cartoon Network, Boomerang, and Toonami. These channels cater for
both pre-schoolers and pre-teens, while JimJam is devoted to young children.

Kwesé has a strong and varied music line-up, which responds to a young market’s insatiable appetite for all things musical. East,West, and Southern African music are all represented, as is gospel from around the world. P Diddy’s REVOLT is available outside of the US for the first time – only on Kwesé!

Kwesé’s sport offering boasts exclusive access to NBA, extensive rugby properties, Australian and Caribbean cricket, boxing, ESL, motorsport, and a range of athletics. Kwesé is also the exclusive home of the ESPN channel, which has strong brand recognition in the market.

The news line-up provides a range of perspectives and includes Bloomberg for a market with a keen interest in business.

As a steadfast companion on the path of hope, Kwesé provides a range of emotionally transformative faith-based channels. The line-up aims to inspire the reverent souls of every viewer seeking to bring the enduring joy of religious enlightenment to their homes.

Note that the channels keep on being added on, and vary by region.